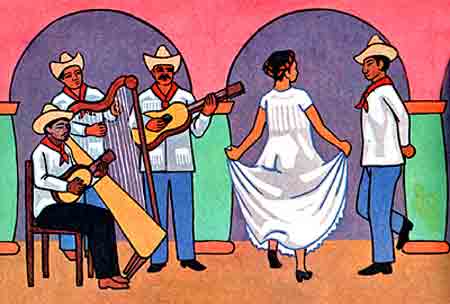 Nialler tends to sniff out anything truly “fresh” before me, so this piece, like so many of my other offerings, is something I’ve been sitting on for ages. Here’s hoping it won’t detract from your enjoyment. In this post, it’s with great pleasure that I present you with a taste of a truly class act, Los Cojolites, all the way from Veracruz on the east coast of Mexico.

Los Cojolitos are in fact just the tip of a folkloric iceberg known as Jarocho; for those of you not already familiar with it, this cultural microcosm thrives on the east coast of Mexico (and further afield at times). It incorporates traditional dress (usually casual all-white and linen, indicative of the sweltering temperatures this region boasts at times), dance (not your average fiery latin affair, but not as stiff as our own Irish traditional dancing) and of course, Music or Son Jarocho. This can be slow or fast in rhythm, and the themes explored can vary vastly – from the travails of rural life to an unrequited love, to simpler things such as how one’s horse has unexpectedly fallen ill. There is a heavy reliance on la jarana (ukelele-like instrument), guitars and the like, but this is nicely balanced with various percussive instruments, rhythmic foot-tapping and even the odd appearance of a marimba.

Los Cojolitos are unique enough (I think!) in that they were just teenagers (8 in total) when they recorded this album a few years back, and so it’s pretty amazing to hear such a high standard of musicianship at such a young age. And, on a more basic level, the tunes pretty much make me smile any time I hear them. I know that they’ve toured throughout that region in Mexico, further afield around the nation and abroad. In any case this is just one act of a much wider scene that deserves attention. Check out their Myspace where there are 3 tunes (2 of which for download) and in the meantime enjoy two of my personal favourites from Los Cojolites, and also take a peek at their performance of “Luna Negra” in Tlacotalpan, Veracruz with special guest Zach De La Rocha!