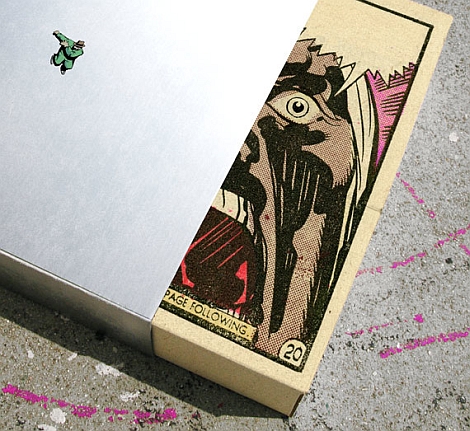 CD Madvillainy “2” The Madlib Remix. 25 tracks.
7-INCH “One Beer (Drunk Version)” Madlib’s original 2004 version, lost until recently on the floor of his Bomb Shelter studio. If you saw the studio you’d understand.
CASSETTE The Madvillainy Demo Tape. 12 tracks, 36 minutes. This is the first and only official release of the infamous Madvillain demo that “leaked into cyberspace,” while the album was still in progress, as DOOM alludes to in the lyrics of “Rhinestone Cowboy.”
T-SHIRT Nominated. Best Rolled L’s. Madvillain shirt.
COMIC BOOK Meanwhile… the continuation of the All Caps video, included with the CD.
THE BOX 12x13x3 inches. Wrapped in a silver like a mask.

A lot of money of course, but you can download Madvillainy 2 from their MP3 store right now!


Some might say its sacrilege to revisit a classic album like Madvillainy. You know, like George Lucas messing around with Star Wars and digitally inserting Jabba The Hut rapping with Han Solo. But Madlib’s never been one to respect convention – and he made this one for headphone listening while on a ten-hour plane ride to Tokyo. But this reworking (we hate to say remix) was so good that, after we sat with it for a while, we decided that we had to make it available.

Yeah, we’re waiting for the new Madvillain too. Every once in a while we hear from DOOM, and he tells us he’s getting closer. Madlib still sends him beat CDs. DOOM always remembers our birthdays. But, we don’t have the sequel, and we know every nuance of Madvillainy. So we’ve been bumping this album while we’re patiently waiting. And it’s been good. Like visiting with a friend who you haven’t seen in years and remembering why you were friends to begin with.

Mantua: A full and hazy report