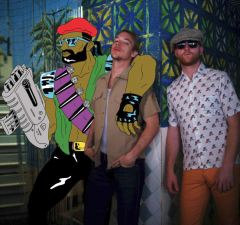 As Major Lazer remixes start dropping officially and unofficially everywhere on the music blogosphere, I’ve picked two of the best ones for your listening pleasure.

Pretty excited for the Diplo and Switch project album Guns Don’t Kill People Lazers Do to be released in mid-June. Here’s the LehtMoJoe remix and an excellent Ghislain Poirier is after the jump.

More remixes on The Hype Machine.