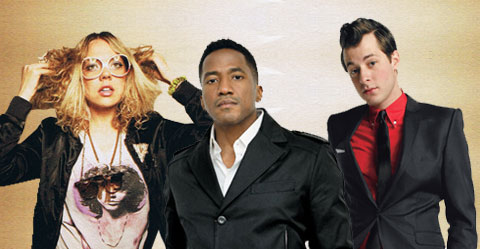 What are the chances? If any uppity young producer have-it-all was unlikely to be featured here any time soon it was probably Mark Ronson. The man responsible for the most ubiquitously annoying covers album going in Version and the pretty awful yet wily Ghostface-featuring ‘Ooh Wee’ . Ugh, it still reminds me of working in a soulless retail space.

Since then, amongst all the other pap Ronson produces he has been showing signs of being a mildly interesting bloke – forming a group with Theophilus London (oh wait, it was for a Gucci campaign – scratch that) and most recently his Zelda-inspired bleepy new song ‘Circuit Breaker’. Last chance to intrigue Mr. Ronson.

Here it is then. Record Collection is what the new Mark Ronson album is called and the first proper single ‘Bang Bang Bang’ features the talents of MNDR and Q-Tip. Here’s a radio rip. I’m intrigued..

Thanks to Sheena for the track heads up.