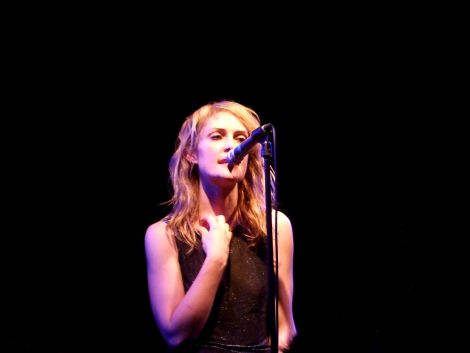 And so, another member of the musical juggernaut known as Broken Social Scene came to town last night. Emily Haines and her band Metric were present for an early show in Spirit. From the moment they stepped out on stage, it was very clear the audience were there to see Ms Haines. And why not? The woman is a sprightly performer and likes to ROCK out. Case in point, the refrain of set-opener “Empty” with the lyrics “Shake your head it’s empty” she puts her hands to her hips and does exactly that, writhing to the crunch of the guitar.

They played a lot of songs from Live it Out as well as some older unreleased stuff. There was no airing of material from her debut solo album (it was hardly the right atmosphere for such dark elegies), “Monster Hospital”, “Poster of a Girl” and “The Police And The Private” were obvious highlights but it was Emily’s voice that was the real draw. She has a striking ambience to her voice that can just floor you and it is utterly captivating. If she ever comes back to tour her solo record, I’ll be there.

Metric – The Police and the Private