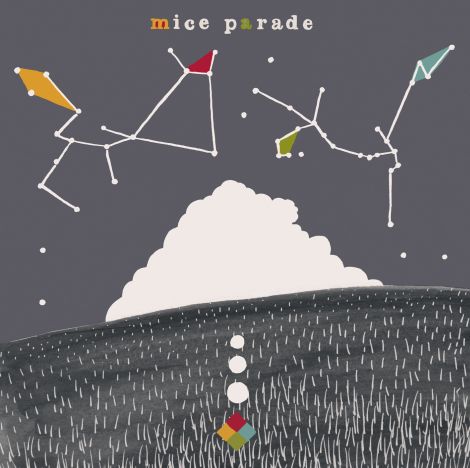 That’s right, Adam Pierce is about to release his seventh studio album as Mice Parade and it’s a self-titled one. 2004’s Obrigado Saudade was a revelation to me, organic, spacious, serene and full of purpose, a mix of folk sensibilities and electronics too accomplished to be labelled as folktronica. The follow-up Bem-Vinda Vontade hinted at more collaboration, a bigger scope and featured more vocals by Pierce himself.

With Mice Parade, Pierce’s voice is utilised in a more traditional way accompanying 7 of the 9 tracks. The result is that the willful experimental edge of the instrumentation is shorned and the songs become more vocal-driven, louder and feel more urgent. It’s not necessarily a bad thing however. Pierce’s droll flat tone can distract from the range occupied by the instrumentation a bit but what lifts the album above minor annoyances is the excellent production, filling each note and with some great layered clattering percussion.

Kristin Anna Valtysdottir (her who was in Múm, also toured with Mice parade from 2003 – 2006 ) reprises her vocal duties from Obrigado on “Double Dolphins on the Nickel” moving from Icelandic to English verse. Laetitia Sadier (Stereolab) appears on “Tales of Las Negras”, one of the albums highlights. While it never scales the heights of Obrigado there’s plenty of quality here to indulge yourself in.

Mice Parade – Out of the Freedom World (from Obrigado Saudade, 2004)