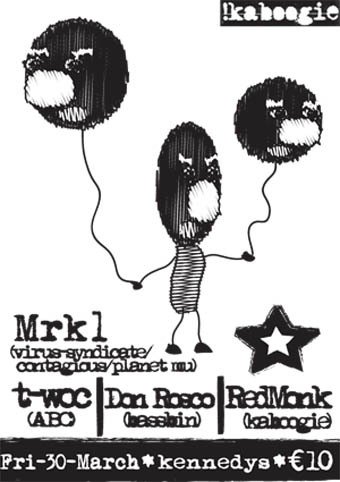 Rolling into town on the good ship dubstep and fresh from releasing one of the genre’s notable albums of 2007 so far, MRK1 (or Mark One as he was formally known) is playing !Kaboogie in Kennedys tonight.

Released on Planet Mu – who have had a few release of note lately (Milanese – Extend, Shitmat – Hang the DJ, Julian Fane – Our New Quarters for starters ) the album Copyright Laws has garnered some attention for a number of reasons. Firstly, it’s a step up from his previous release One Way. Secondly, it’s a heady mix of dubstep fused with spacey reggae rhythms and industrial motifs. Thirdly, Mark One is probably better known for his production skills with grime crew Virus Syndicate who featured on Mary Anne Hobb’s genre defining Dubstep “Warrior Dubz” compilation so it may be fair to say people are taking note of the artists on the compilation.

Of the two tracks featured here “Sensi Skank” works the spacey ragga template to great effect while “I Got Two” is a paean to the ‘erb and is notable for vocals by prolific Jamaican reggae superstar Sizzla and the gutbusting beat.