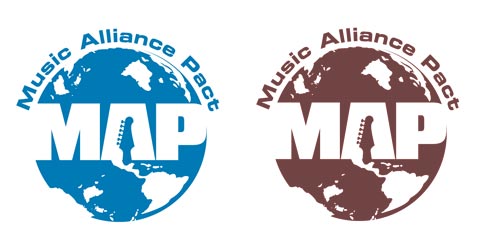 A monthly feature where music bloggers across the world share a track from their home country that they think you should hear.

This month we welcome Canada and Norway.

AMERICA: I Guess I’m Floating
City Center – Summer School
Brooklyn’s City Center is the solo work of Fred Thomas from Saturday Looks Good To Me, focusing on ornamental, experimental pop songs created from found sounds, manipulated samples and Thomas’s own guitar and vocals. While there’s no official debut yet, he has released a handful of 7”s and there are over 30 free MP3s up for grabs at his blog. Look for a debut sometime in 2009.

ARGENTINA: Zonaindie
Sync Filmico – El Polvo De Tus Sentimientos
With heavy influences from alt. rockers like Radiohead and Jaime Sin Tierra, this song is from Sync Filmico’s second album, El Mar. It was released this year on CD and as free MP3 download from their website. Their first record was published under a Creative Commons license and can also be downloaded for free.

AUSTRALIA: Who The Bloody Hell Are They?
The Temper Trap – Sweet Disposition
There’s a lot of buzz surrounding the new material from Melbourne’s The Temper Trap and no wonder, because the first taste of their 2009-due album, Sweet Disposition, is a delay-driven melody fest. Recalling the sounds of ’80s U2, Sweet Disposition was recorded in the UK with famed producer Jim Abbiss, who has worked with some little-known acts like Arctic Monkeys, DJ Shadow, Bjork and Massive Attack.

CANADA: I(Heart)Music
Ketch Harbour Wolves – So Long To The Ground
Even by the standards of Canadian indie rock, Ketch Harbour Wolves are pretty under the radar. Dead Calm Horizon is one of the best albums of the year – and free for download on the band’s site (http://www.ketchharbourwolves.com) no less. Imagine that The National were transported to the Canadian wilderness and started writing songs about rural living and you’d have a good idea of where Ketch Harbour Wolves are coming from. The results are, simply put, hauntingly gorgeous.

DENMARK: Pastries, Peppers And Canals
Heidi Mortenson – It’s True
Highly regarded as the queen of experimental, unpredictable music, Heidi’s website says that she “makes colorful and textured songs with a nerdy and dazed approach; her sound grows from playful experiments and inventive production. Add emotional drive, a mentalist flavor and soul of old cartoon” – and who are we to argue?

ENGLAND: The Daily Growl
Mumford & Sons – Roll Away Your Stone
Here’s some new folky goodness for you. Not folky as in the beardy sense, mainly because the kids in Mumford & Sons are probably too young to grow beards. Led by Marcus Mumford, this west London band peddle a sparkly, breezy, bluegrass-infused folk-pop, and given that they’ve been together for less than a year, they’ve arrived remarkably fully-formed.

ICELAND: I Love Icelandic Music
Hellvar – Nowhere
Together the two boys and two girls of Hellvar stir up a cocktail from electronica to new wave with a twist of lime. Debut album Bat Out Of Hellvar was released at the end of 2007 and was the first release on new Icelandic label Kimi Records. The band have toured in the USA, Germany and China.

IRELAND: Nialler9
Cap Pas Cap – We Are Men (Thatboytim remix)
Cap Pas Cap are heavily inspired by rock music on the fringes – no wave, punk and Krautrock. As a taster for a debut in 2009, the band will release the We Are Men 12″ in December with one original track and three hi-grade remixes from Decal, Jape and this from Thatboytim. As well as playing in Cap Pas Cap, members of the band run the Skinny Wolves label which releases stuff from the likes of Indian Jewelry, Telepathe and Effie Briest.

ITALY: Polaroid
Did – Ask U2
If I could have Foals playing at my house tonight, I would surely call Did as opening band. Four young guys from Turin who play “yellow punk-funk” with pop melodies. They have a free download debut EP out now on Kirsten’s Postcard label. Dance!

NORWAY: Eardrums
My Little Pony – I Don’t Know Pt.1
“The band, not the brand” seems to be a statement that will follow Norwegian indiepop orchestra My Little Pony forever. They recently released their debut album Think Too Much to great critical acclaim and new fans include one of Norway’s biggest pop stars, Marit Larsen. My Little Pony are a pure pop band, where strong melodies and interesting lyrics make the framework of their music, but they also mix in several other genres in their indiepop universe, from bluegrass and Afro-jazz to reggae and more folk-oriented elements.

SCOTLAND: The Pop Cop
Beerjacket – Drum
Beerjacket is a young man with an acoustic guitar whose backing band comprises a tambourine and a drum machine. Stylistic comparisons to Elliott Smith or Jose Gonzalez wouldn’t be far off, while his prolific output of albums offer an endearing lo-fi sound that lets the quality of his songs and the calibre of his songwriting steal the show.

SPAIN: El Blog De La Nadadora
Espanto – Profesora De Primaria
Espanto are a duo formed by Luis and Teresa, who come from a small city in the north of Spain. After releasing a series of extraordinary demos, their first CD, Cantando En Tu Siesta – on the Spanish label Birra y Perdiz – compiled their best songs up till 2007. Their music is basically pop, with references that range from Television Personalities to The Magnetic Fields.

SWEDEN: Swedesplease
Hajen – Sharks
Hajen has a very limited repertoire (three MySpace demos to be exact), but she’s just the type of artist that deserves the wider recognition the web can provide. She may not be completely ready for primetime but her uniquely Swedish take on the piano pop of Tori Amos and Regina Spektor is impressive. Hajen means shark in Swedish so it seems appropriate to highlight her theme song. With its warning of “sharks in the water, sharks up on land” you can bet this is not simply a tale of danger in the ocean.

Tonight’s sizey stories – On The Hour