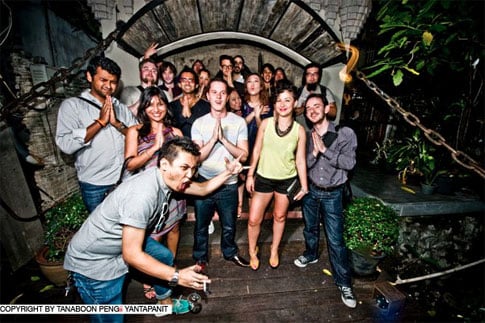 As part of a gang of 11 bloggers, I spent 10 days last November in Thailand and India courtesy of Smirnoff’s Nightlife Exchange Project (see all posts from the trip) checking out the nightlife, music and culture of the cities of Mumbai, Bangkok and Bangalore.

When you think of Bangkok, you’d be forgiven for thinking of lady boys, lurid sex, rickshaws and Thai brides but if you look beyond those clichéd ideas, you’ll find a city where young people are thriving in creative practices. On my recent trip to the city, in between visits to authentic Thai restaurants, The Grand Palace, roof-top firework displays, Thai-boxing, a water-taxi ride, a thrilling Sunday afternoon visit to JJ weekend markets and inhaling the ubiquitous smell of Thai spices (see gallery below), I met a number of young people who are doing their own thing in music, fashion, art and graphic design while doing lots of partying.

These twenty somethings are breathing new life into the city. There was the cute as a button Ploi Horwang (pictured on the left with Lola), the singer of an electro-pop group called The Diet Pills who I met along with a posse of local photographers, musicians and DJs in Blue Velvet Bar, a neighbourhood bar with a moat and draw bridge at its entrance. There was Jan Navanath Sriyuksiri aka Jelly Jan, a local entrepreneur who specialises in custom cakes and baked goods.

A lot of people I met were friends with the SuperrZaaap crew, a collective of party organisers, designers, musicians, DJs and fashionistas whose heart of operations exists in a shop off Siam Square (photo from outside). It stocks retro Casio watches, electro 12″s, local compilations curated by SuperrZaaap, cool gear, Daft Punk action figures and their own clothing line (see photos below). Run by the couple at the centre of SuperrZaaap, Bo and Piper, the shop is a trendy hub that represents the young cool Bangkok population, like a mini Urban Outfitters.

Bo told me that hip-hop is the ubiquitous crowd-puller in Bangkok but Superrzaaap’s preferred genres electro and tech-house are getting bigger in Bangkok at the moment. SuperrZaaap has its own party DJ wing, who have warmed up local crowds for names like Deadmau5, Boys Noise, The Bloody Beetroots, Major Lazer and Ed Banger artists. The clothing wing sprung out of nights like those, where SuperrZaap members sported a custom glow in the dark t-shirt that became a wanted item on the local party scene. A year later they opened their first store (a second store burned down after a mall fire started by anti-government protesters) and before long the collective had put on their biggest party to date which over 2,000 people attended. Young Thai people like the SuperrZaap crew are removing those clichés of old in inspiring ways. Look them up next time you visit and check out their blog.

Piper also goes under the name of DJ Supersonic and he provided an electro mix of recent favourites from South Rakkas, Surkin, Tiga, Daft Punk and more. A full tracklisting. 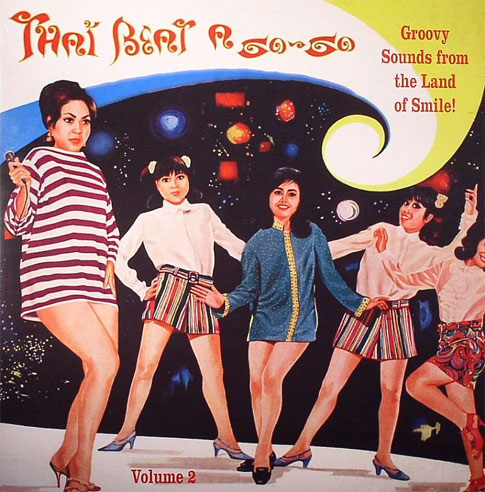 Away from contemporary Thai music which is heavily influenced by Western trends, there is a wealth of brilliant compilations of old ’60s and ’70s rock and roll, Thai funk and folk to explore. Try out Sublime Frequencies‘ Thai Beat A Go Go (I got them on eMusic) and the Thai Funk Zudrangma compilations. A sample of songs from the compilations follow including a Thai cover of the Boney M song which Duck Sauce used for ‘Barbra Streisand‘.

Thai a Go Go by Nialler9