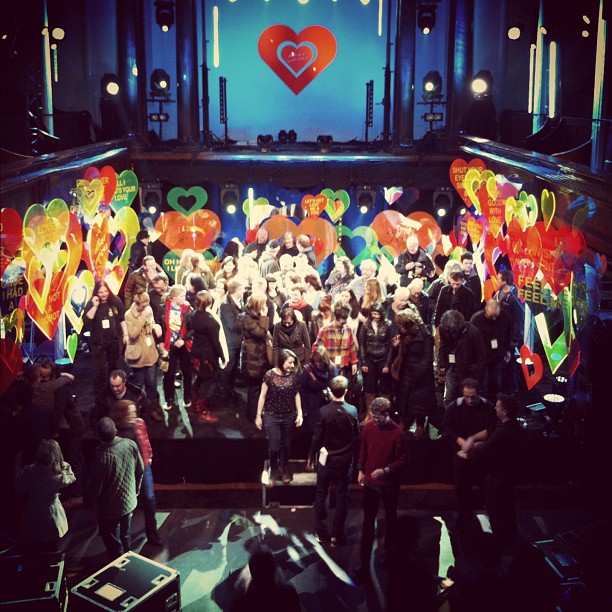 When Other Voices started, it was very much in the mould of a regular TV show. Go somewhere and make the thing, record it and broadcast it at a later date. In the last few years though, the music show has made the leap into online too with live streams via RTE and The Guardian, an active social media presence and a Youtube channel which hosts performances shot just days prior.

The show started in the intimate environs of St. James Church but it too has made the leap further afield in recent years. A show in New York a couple of years ago galvanised the series to spread its wings, and this year, in its eleventh season, it travelled to the UK City of Culture, Derry, last weekend and it will go to London to complete the triangle in April.

Tonight, RTE will broadcast a 2 hour special featuring the highlights from the weekend’s sets from 11pm to 1am. I was there the entire weekend reporting for the Other Voices blog and here are some of my personal highlights, in a numbered but no particular order, from the last few days. 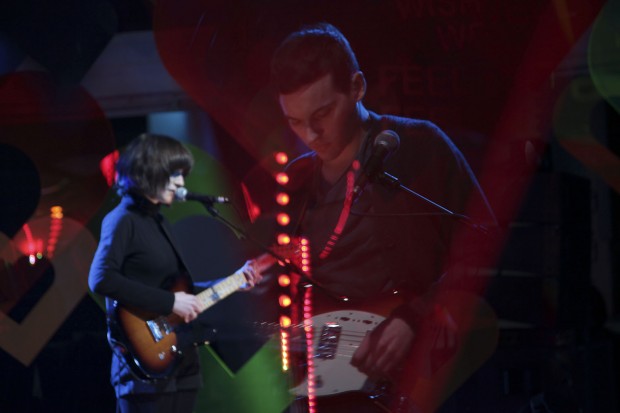 Despite an obvious shyness between songs, the set from Daughter was notable for their music which can rise to an awesome tumult.

Elena Tonra’s vocals ground everything in a young woman’s emotional disposition; (“All my limbs can become trees / All my children can become me / What a mess I leave / To follow”). She performs through her dark black hair with a transfixing magnetism, often singing lyrics about men who aren’t the right fit or who aren’t around anymore – “I want him but we’re not right” (‘Smother’), “Collecting names of the lovers that went wrong” (‘Youth’) “Take your hands off him / cos he’s the only one I’ve ever loved.” (‘Love’).

It’s no wonder that their songs have been used on The Vampire Diaries, their scratched violin-bow on guitar atmospheric tones and arrangements which lap into raging intensity and calm moments of serenity perfectly fit with the transformation of the natural into the supernatural. The song ‘Candles’ even appears to be inspired by the recent vampire pop culture resurgence. “That boy, take me away, into the night / Out of the hum of the street lights and into a forest / I’ll do whatever you say to me in the dark.” Really looking forward to their album If You Leave out next month on 4AD. 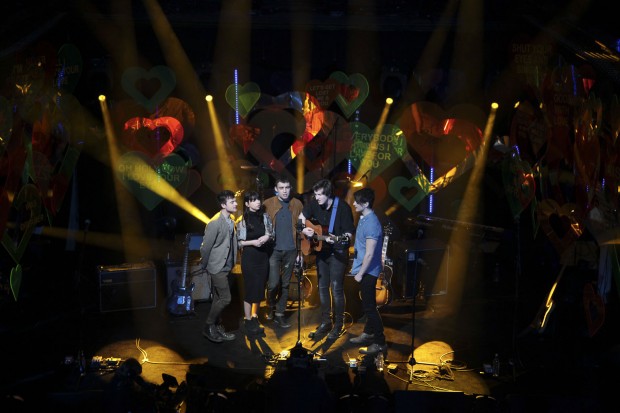 Just over a year ago, Little Green Cars played the Other Voices church in Dingle. At the time, that decision was a bit of a gamble, while the band were a promising proposition, they had not played stages of this ilk before and least not in front of TV cameras.

The gamble easily paid off. There was no doubt that Little Green Cars were able for it. 14 months later, this band were more than capable to do it again. On the cusp of yet another milestone, a debut album produced by Markus Dravs who produced Mumford & Sons’ phenomenally successful latest album Babel and Coldplay’s Mylo Xyloto, the band returned to Other Voices Derry to show just how far they’ve come. 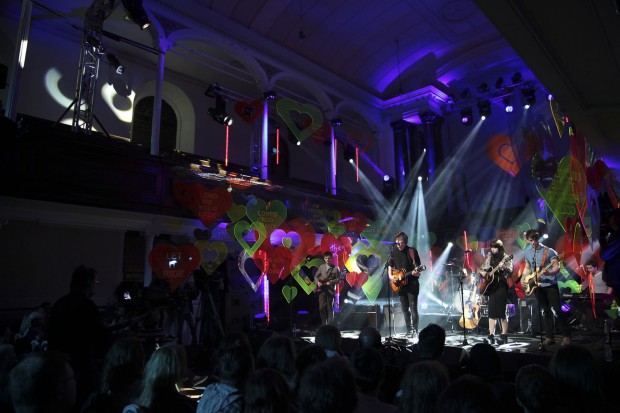 The five-piece huddled around a microphone for the first three songs of their set and in doing so showcased their super-strong a capella harmonies, which increased in volume and intensity in a beautiful knock-on effect during ‘The John Wayne’.

The full band portion was no less impressive with singer Faye O’Rourke standing out during a new song from their album Absolute Zero and an assured performance of latest single ‘Harper Lee’ and a now established favourite ‘My Love Took Me Down To The River (To Silence Me)’. They’ve come so far. Next stop, SXSW… 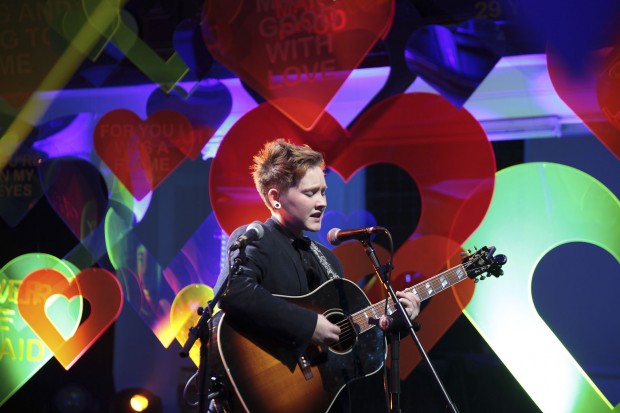 16-year-old Bridie Monds-Watson SOAK was everywhere in Derry city over the weekend. From stepping in at Banter when another guest was running late to hanging out with her mates on the outdoor benches in the Derry Craft Village to the local café when I was grabbing lunch to chatting to guests in the City Hotel bar after the show. As she said to Dylan Haskins in the Guardian video, she’ll be the first to admit her timing couldn’t be better.

She has only been writing songs for about a year before was invited to perform at Other Voices in Dingle in December, and since then the industry buzz has grown into a very live wire one.

Yet, in the short time that has elapsed since Dingle, Bridey’s spirit and performance has improved. In Dingle, she sat to sing. In her hometown venue of the Glassworks, she stood. From confidently meek to commandingly singing her heart out. While there are worries that it’s too soon for such attention on one so young, so far, she’s been well able for it. It’s the simplicity and directness of songs like ‘Explosion’ that is her biggest asset right now. 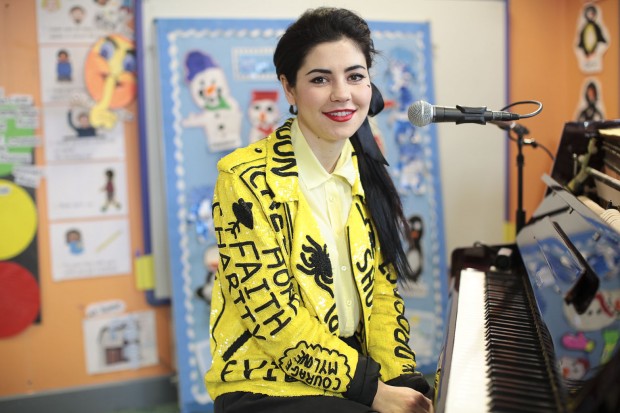 There was no doubt who the big star of the second night night judging by the reception that Marina & The Diamonds received for just stepping onto the stage. One fan was spotted hyperventilating during her set. It seems everywhere she goes, the Welsh/Greek singer’s persona charms.

Marina spent the afternoon in St Eithne’s Primary school where she was received like a dignitary by a classroom of local children singing her hit ‘Primadonna’ to her. She returned the favour by playing a few songs on the school piano. And it resulted in this magic picture by Rich Gilligan. 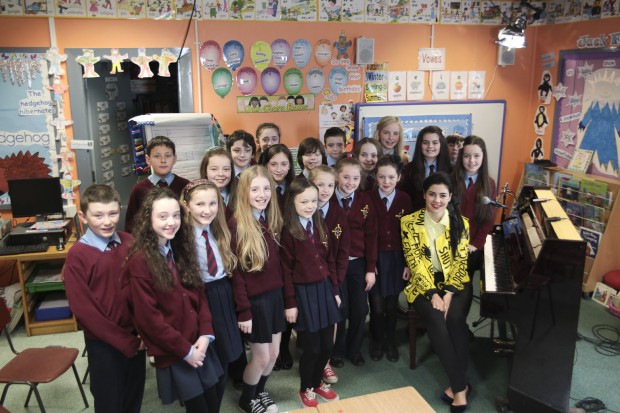 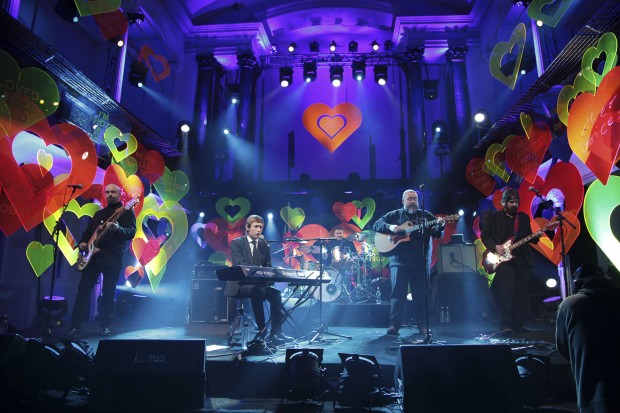 While SOAK is helping a city with a troubled past redefine itself with fresh voices, a hometown veteran Neil Hannon wastes no time in addressing the city’s naming dispute in elegant fashion with a rendition of his Divine Comedy 1998 Fin De Siecle song ‘Sunrise’.

“I was born in Londonderry / I was born in Derry City too / Oh what a special child / To see such things and still to smile / I knew that there was something wrong / But I kept my head down and carried on.”