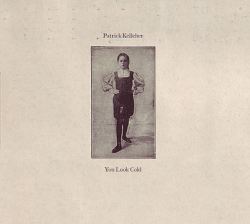 Ever since ‘Coat to Wear’ was brought to attention last year on the Analogue vinyl release, the name Patrick Kelleher has been slowly gathering a buzz in Dublin circles.

This Kelleher chap makes all the tunes himself (extensive list of instruments on the sleeve notes include a hazelnut spread jar, a door, a bouzouki and a Boss loop station amongst others), is 24 years of age, grew up in Rugby in England, is in the band Children Under Hoof and his own live band used to invariably change names per gig – from the now-standard “And His Cold Dead Hands” to names like:

Awesome. The textured album You Look Cold which is released through Osaka on June 19th is a brilliant first release. You can clearly hear influences of early 90s hip-hop, leftfield electronica, experimental/ambient music, lo-fi folk like Animal Collective, film soundtracks and spaghetti westerns. Not one track on the album truly represents his aesthetic but I’m quite partial to this 80s cop theme romper stomper at the moment. You shouldn’t judge the album on this track alone, perhaps the brilliantly arranged ‘Coat to Wear’ is more indicative, but there’s no denying his talent. In fact, you should just buy the thing. You have my word, it’s another of Irish music’s great releases for 2009, a soon to be vintage year it seems.

Patrick Kelleher – He Has To Sleep Sometime

The launch gig takes place on the 18th of June in Academy 2, Dublin with support from Hulk and Angkorwat for a fiver. The album is available for pre-release from Osaka. Grab a free release from Pascal Country Sounds before that.