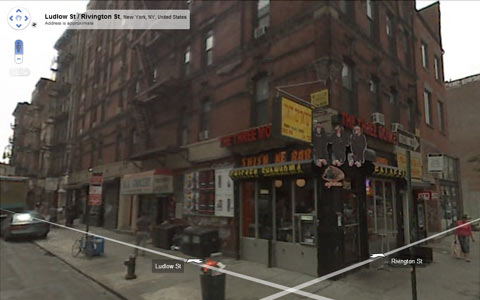 The site of the cover photograph of Paul’s Boutique taken from Google Maps in modern times.

Possibly my favourite musical act, Beastie Boys are about to release a digitally remastered version of one of my favourite albums of all time. Here I recount my first connections with the band. An embedded version of Paul’s Boutique (with five videos) is available after the jump as well as some links to some other goodies. Paul’s Boutique was a new plateau in music for me. If you’ve never heard it, you’re missing out. This article first appeared in State, Issue 8.

One evening after school, I rifled through a grey plastic container of recorded cassette tapes belonging to my elder sister. As a music-hungry 13-year-old, I was looking for a copy of Nirvana’s Nevermind. My grubby young hands thumbed cassettes from Temple Of The Dog, The Breeders, Babes In Toyland, Rage Against The Machine and a myriad of forgotten grunge acts. One cassette’s contents, written in my sister’s neat handwriting, appealed more than the others, however, primarily because of titles like ‘Heart Attack Man’, ‘Tough Guy’, and ‘B-Boys Making With The Freak Freak’. That album was Ill Communication. The Beasties’ 1994 album was easily the most mind-blowing thing I’d heard up to that point. It starts with a dog whimpering before ‘Sure Shot’ hits in with its crackled flute sample, funky percussion and the distinctive timbres of MCA, Mike D and Adrock. The rest of the album’s 19 songs live up to that initial promise: high grade reference-heavy rap, short thrashy hardcore punk, infinitely quotable interludes, sheep samples, funk-based instrumentals, one of the best songs ever to combine punk riffs and scratching in ‘Sabotage’, Q-Tip and Tibetan monk chants. The remainder of my school years could basically be pinpointed by the Beasties’ back catalogue, as myself and my fellow fanatic Ciaran walked to school rapping lines at each other, copied the ‘Intergalactic’ dance, and shared issues of the short-lived cult Beastie mag, Grand Royal. We even started a Beastie Boys fansite called Alright Hear This.

I always loved the way the Beasties approached things, whether it was their consistently playful interviews, their fondness for alter-egos and wigs, or the care and attention given to their music videos. I love the way they recorded hours of live band material and then sampled and cut up the fruits of their labour into hip-hop tracks for Hello Nasty. I love the drug-induced polychromatic sample mecca of Paul’s Boutique, the puerile but entertaining Licensed To Ill, the eclectic brilliance of Check Your Head, the instrumental albums, the pisstake country songs and the ephemeral punk tunes. They are three guys from New York who took me on a multi-faceted journey through music and continue to inspire me to listen. To paraphrase ‘Sure Shot’, I strap on those ear goggles and I’m ready to go.

Album commentary from the band on the album.