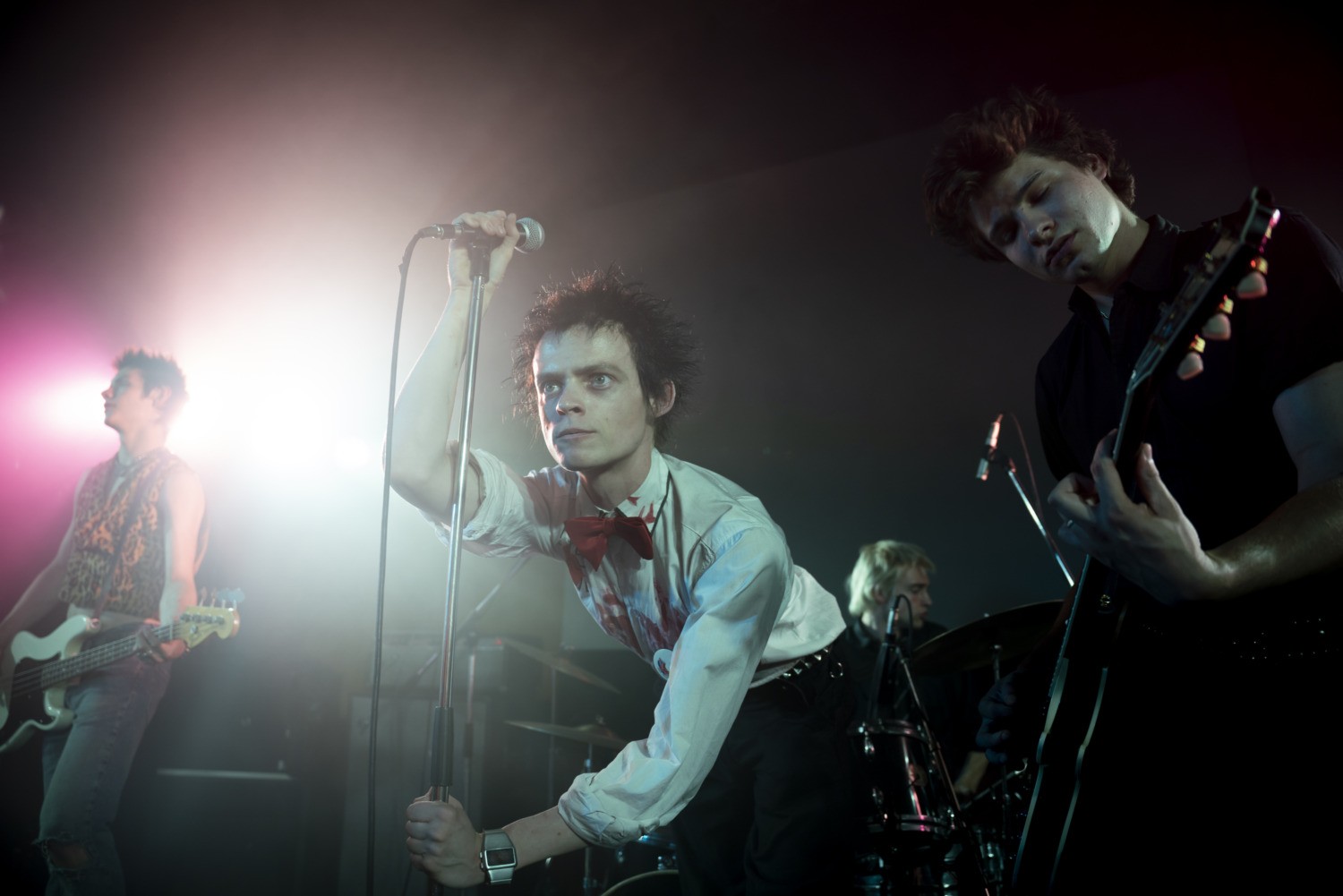 The story of the Sex Pistols is in the pantheon of punk lore. Every teenager who gets excited by the power of strings, drums and rock’n’roll has read the stories of how the English punk band burned brightly, and crashed just as quickly but not before igniting a cultural revolution and leaving a iconoclastic legacy that would become a key influence on generations to follow, lighting a punk-political and cultural powderkeg in their wake that ignited revolutionary cultural change, in music and fashion, and blowing up the dull authoritarian Britain of the seventies.

For those of us who have spent time with the Sex Pistols backstory in our younger years, Pistol, the new six-episode limited drama series, now streaming exclusively on Disney+, directed by Danny Boyle, gives us a peek beyond the lore, below the surface of the myth, mainly through the community around the band.

We follow the personal story of guitarist Steve Jones as the central protagonist, with source material from his memoir Lonely Boy: Tales from a Sex Pistol. Jones was one of the less rowdy members of the band and his personal recollections are the foundation for Pistol.

The guitarist fractured homelife was fraught with sexual abuse, illiteracy and a delinquency that sees, Jones (played by Toby Wallace), in his first great rock’n’roll act on screen, swindling David Bowie’s gear from the Hammersmith Odeon after the last Ziggy Stardust concert in 1973.

From their the sensitive frustrated boy finds a voice and a community with his fellow Sex Pistols and in a cast of characters from King’s Road iconic SEX punk boutique.

The show revolves around the relationships Jones formed at the fetish latex and leather clothes emporium which was run by then unknown fashion designer Vivienne Westwood (Talulah Riley) and her boyfriend and Sex Pistols manager Malcolm McLaren (Thomas Brodie-Sangster of The Queen’s Gambit delighting in playing McLaren’s impresario eccentricities). Westwood and McLaren are pitched as the patrons of the punk movement, paving the way for the Sex Pistols’ ascendency by lending them Westwood’s custom clothes, giving them a rehearsal space and getting them out of legal trouble.

Sometimes that patronage, leads to questionable outcomes depicted in the show, like the “black beauty” amphetamines McLaren slips Jones in the show when the guitarist is trying to bring his fury in the early rehearsal days of the band.

The women of Pistol

The stories of the women in the circle of the band and the punk movement are illuminated in depth. The impact of Pamela Rooke (Game Of Thrones‘ Maisie Williams) wearing provocative clothing in public is covered (or revealed) and Chrissie Hynde (Sydney Chandler), a clerk in the shop, who Jones develops a relationship with is far from being an avatar in the Sex Pistols story. She is given encouragement, musicianship and desires of her own, in a time before she became famous with The Pretenders.

There’s also a plot treated with sympathy involving the Sex Pistol fan Pauline from Birmingham (Bianca Stephens), whose story of asylum, assault and abortion lead to the band writing ‘Bodies’ from Never Mind The Bollocks.

Rotten to the core

The show really ignites when the Johnny Rotten “who doesn’t know a triple-clef from a cleft palate,” shows up, played with a caustic sarcastic sneer by Anson Boon, and the group of disenfranchised barely-competent musicians clash and bicker among themselves before coagulating into the temporary unit that brought incendiary mission statement of a “no future” generation that came to define the era and helps fulfil the show’s band biopic credentials, as people start coming to gigs, and the media frenzy begins, with the band’s appearance on Bill Grundy given a delicious centre staging.

The show’s cinematography utilises off-kilter framing and hazy grading, and as the show reaches its imploding crescendo, the show’s live performance sequences are among its best scenes.

The show crucially keeps the Sex Pistols’ music and its incendiary messages centre stage. In doing so, Pistol largely avoids the typical pitfalls of many rock’n’roll biopics.

For a story that’s been often told, Pistol wisely enlarges its focus beyond the band’s core narrative, in a way that is more suitably a 21st century story as opposed to the classic rock band drama retelling we’ve seen dozens of times before.

Pistol is now streaming exclusively on Disney+, you can sign up to Disney+ here.

Pistol is available on Disney+ streaming from today, May 31st.