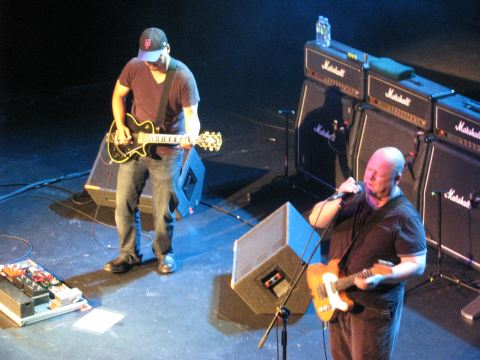 Yes. After my jealous post last Thursday, I actually made it to the last night of the Pixies in Dublin. In a balcony box no less, AND they played ‘Where is My Mind’ for an encore! I hadn’t been as excited going to a gig in eons, I think I practically skipped to the venue in anticipation.

Of course, I knew what I was getting. I had read the reviews. Doolittle all the way through with b-sides. There are no spoilers in live music though just experience. They opened with 4 b-sides : ‘Dance the Manta Ray’, ‘Weird at My School’, ‘Bailey’s Walk’ and ‘Manta Ray’. I’d hardly consider them b-sides myself thanks to repeated listening to the complete Pixies compilation. They are just another part of the fabric of their world.

It was all solid gold. The band didn’t say much but they let their instruments do the talking. Dave Lovering for his part is one of the most dexterous drummers going. Like all amazing drummers, he doesn’t even look like he’s playing what you’re hearing and Joey Santiago can still make that guitar wail. ‘Tame’ was phenomenal, with Frank Black still able to growling the chorus as if he’s shapeshifting into a werewolf on the spot.

For the whole night, the vocals were shadowed by a good portion of the crowd singing every line back at the stage. Doolittle has three of the greatest rock songs of the last twenty years -‘Debaser’, ‘Monkey Gone to Heaven’ and ‘Here Comes Your Man’. The album tracks are as good in their own way too. Kim Deal’s singing on ‘Silver’ was magic as was Santiago’s guitar parts.

Once the 15 songs on Doolittle were dispatched wonderfully, two more b-sides followed with the ‘Wave of Mutilation (UK Surf)’, a slow version of the song I much prefer to the faster album version and then a white-hot ‘Into the White’. As the band left the stage, looking overwhelmed and genuinely a bit emotional (particularly Lovering) it couldn’t have got any better.

Five minutes later, while people were filing out of the venue, it did. They returned and we heard “Ooh Ooooooh”. Yes, they played ‘Where is My Mind?’. With the house lights on. And it was fucking amazing. What a gig.

(Unfortunately my battery ran out at that point)