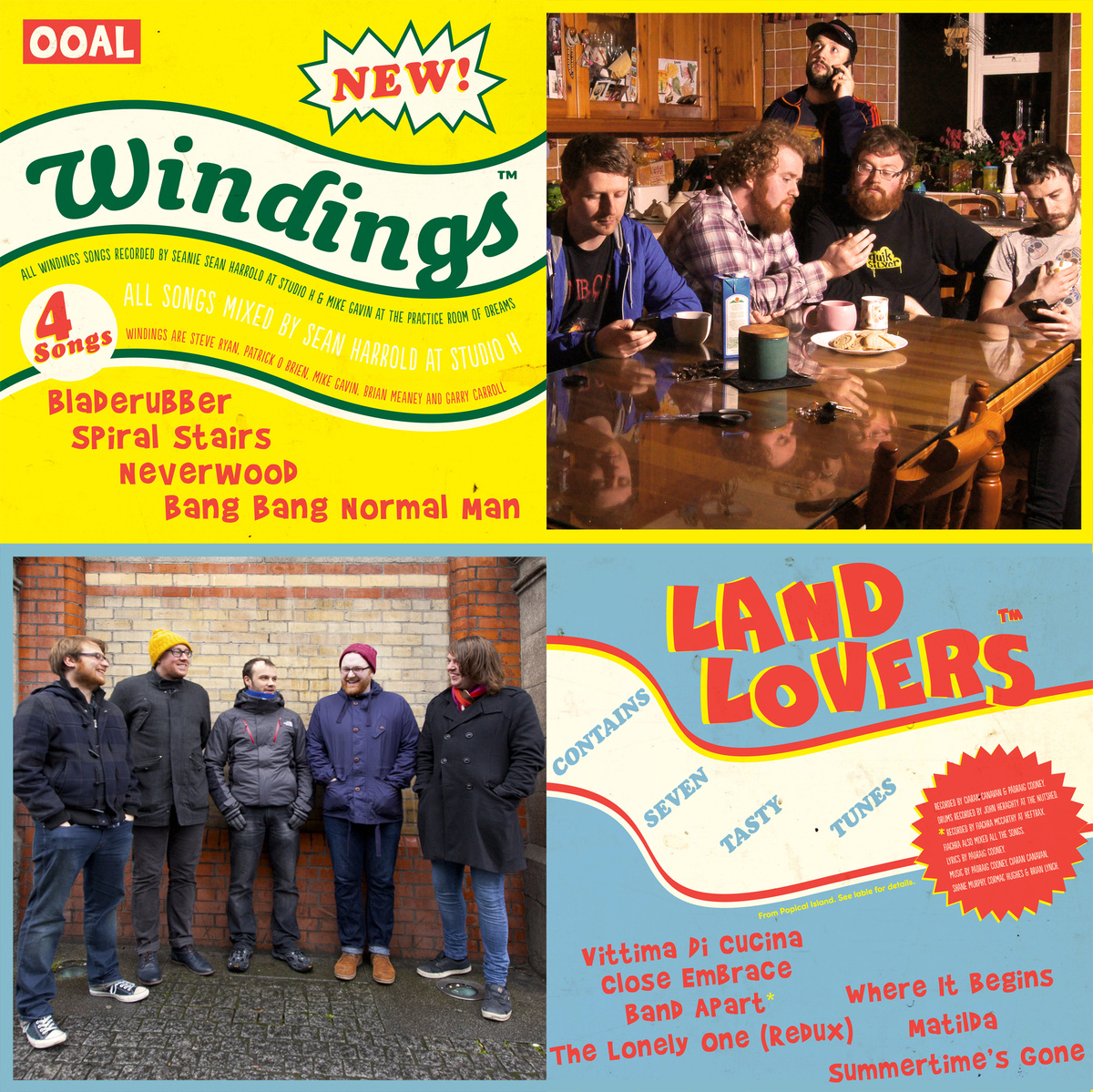 
Today is the release day for windings & Land Lovers‘ split 12″ LP which is also a combined release from two of Ireland’s best indie/rock labels Limerick-based Out On A Limb and Dublin-based Popical Island. Split LPs are unusual beasts in this day and age so I asked Pádraig Cooney of Land Lovers a bit about the 11-track release which you can hear in full….now:

How did the idea come about to do a split between two labels?
This one was driven by the bands rather than the labels. Land Lovers and windings came to this idea through windings’ curation of a stage at an Out on a Limb all-dayer in Dolan’s. Land Lovers played at that and, already being fans of windings’ I Am Not The Crow, and with a homeless bunch of songs on our hands, we decided to broach the idea of a split. As chance would have it, windings were also in mind of putting out something short of an album, so it was a neat little solution.

Split records aren’t really things that happen that often these days due to digital releases etc. Why do one?
For one, a solely digital release just isn’t exciting to me. I like to have tangible evidence of our labour. However, EPs just aren’t exciting either. You don’t get too many physical EPs nowadays, except on tape. The split record is a chance to release something on a nicer format at an affordable cost to the bands, and it has the added attraction of requiring cooperation between people who otherwise wouldn’t work together.

How did releasing a split LP affect the songs or recordings?
In practical ways, we were limited to about 22 minutes of music each. So that put a boundary on what songs we did and so on. We did a song called ‘Summertime’s Gone’ that had loud crashing guitars and what not purely because we thought it might appeal to the indie rockers of Limerick.

At what stage did the bands hear each others’ songs?
We heard their songs in a couple of gigs we did together towards the end of last year, but not the recordings until after that. I think I sent Steve a couple of early mixes but there wasn’t a huge amount of interaction on that front. We trusted each other to make some good music and there was no question of vetoing anything or trying to impose a common style or theme.

Is there a competitive element in a split?
Yes. We won 7-4 in terms of songs on the record (it was a draw in terms of minutes of music) but windings won the race to have tracks 1-4 on the download version. They also dominated the Longest Song category. Our team has some work to do if we’re to make up ground at this stage but we’ll be giving 110%. They are a big team with great players but we are also a big team with very powerful players and a wonderful stadium. The fans are everything to us.

Finally who would win in a battle of wits? Popical or Out on a limb? Land Lovers or Windings? What would your arena/game of choice be?
I think the only way to settle this would be a Battle of Wits at the most convenient services station between Dublin and Limerick (Junction 14 Mayfield). I offer this challenge to Out on a Limb. They can bring four competitors, as will we. I warn them that all four of our people will have their Leaving Certs. It’ll be a straight quiz, officiated by the parish priest from Monasterevin.

The two bands will support the release with launch gigs in Limerick (7th March) and Dublin (8th March) and a nationwide tour to follow.