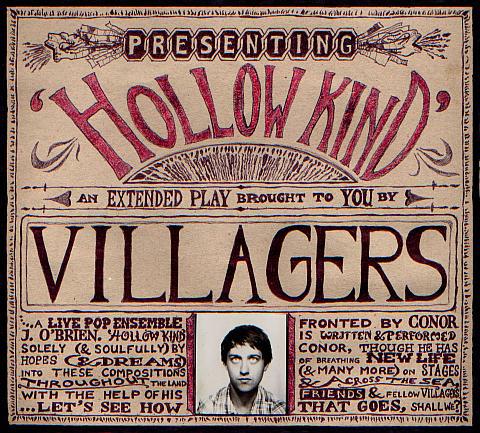 Since the first inklings of Conor J. O’ Brien’s new Villagers project was whispered about in the latter part of 2008, that whisper has become a loud swoon thanks to a handful of impressive live shows and a couple of myspace demos. I saw the band support Halves in November and was thoroughly impressed with the songcraft, arrangements and performance. As a result, Villagers featured on the cover of the latest (and digital-only) issue of State with some stunning photography from Rich Gilligan. Now I am pleased to say that Conor has allowed me to debut the studio version of 2 tracks from the 4-track EP, Hollow Kind out February 9th, right here.

‘The Meaning Of the Ritual’ is a little different to the myspace demo version in that the organ is much more understated but the sentiment remains anything but hollow.

Villagers – The Meaning of the Ritual

Meanwhile, the opening track of the EP, ‘Down Under the Sea’ is smothered in an uneasy menacing atmosphere with strange chords seeking something subterranean.

Villagers – Down, Under the Sea

Incidentally, today is Conor’s birthday. Wish him well. Conor and his fellow Villagers will be touring in February also. Highly recommended.