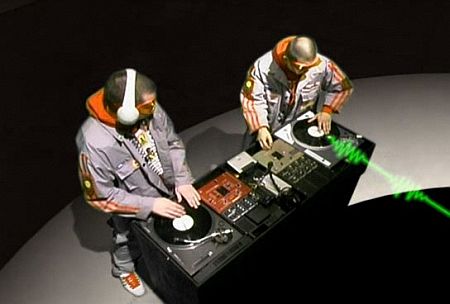 If you’re a fan of turntablists and creative DJs get yourself down to the Temple Bar Music Centre on Friday night (May 26th) for a performance from legendary DJ Q-bert formerly of the Invisibl Skratch Picklz. The gig starts at 11pm with support from Tuki, Savwar and Gem and tickets are priced €22.50. Update: More info here

Unfortunately, I currently own no Q-bert music but I do possess a copy of his DVD Wave Twisters from 2001 which is a perfect blend of scratching, sampling and synchronised visuals. Every sound that Q-bert makes with the decks soundtracks an event or effect in the animated film which follows a loose plot:

A crew of heroes, cleverly disguised as a team of oral hygenists, is determined to save the lost arts of Hip Hop (B-boying, Graffiti, MCing, and of course, Skratching) from total extinction. The lost arts are being oppressed throughout inner-space by lord Ook and his evil minions the Chinheads. The dental commander and his team, armed with the ancient relic known as the Wave Twister (the only weapon powerful enough to defeat the enemies), travel to the far ends of inner-space for a final confrontation with the sinister army of oppressors.

Sounds kind of silly but the visualisation of the music makes this a breathtaking and engaging watch.

Since retiring from the Invisibl Skratch Picklz (which also includes such turntablist luminaries as Mixmaster Mike, Shortcut and D-Styles) , Q-bert and fellow Skratch Pickl Yogafrog have gone on to make the revolutionary QFO turntable, embodying the combination of mixer and turntable and other innovative DJ products. If you’re still not convinced by the self-proclaimed “Greatest DJ of all time!”, check out the following Youtube videos from Wave Twisters and Dojo for some salivating turntable action.