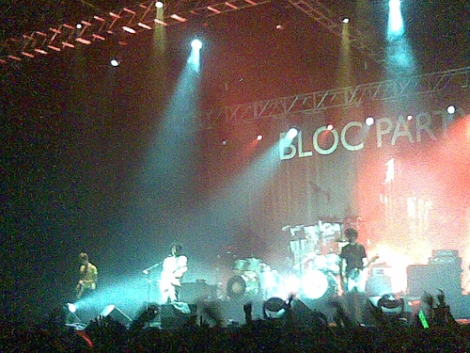 Luckily enough I ended up catching Bloc Party’s set in the Big Top at the Phoenix Park, Dublin last Saturday (nuff respect for the ticket Sarah!!) For those of you unfamiliar with the venue, it’s basically a colossal (really!) tent that’s been put up beside the President’s house in Europe’s largest urban park! As a result I was expecting it to be a dreary mud-fest severely hampered by sound problems. Happily, a brilliant performance and a surprisingly clear and crisp sound system ensured I was proven wrong.

Being really late, me and my compadres (Co, Steve and Stanley) missed the first tune or two, but we quickly flung ourselves into the melee, battling through throngs of mental punters. Even though we were fairly sober, it still seemed to me that it would be an understatement to describe the gigantic (10,000 or so) crowd at this gig as hyperactive. A fairly constant flow of crowdsurfers passed over our heads as we were constantly kept on our toes by the mad bastards around us, and the wonderfully reckless mosh-pit in front of us.

The excellent “Like Eating Glass” was the first one that got me jumping (I was late, remember), and Kele and co also performed a beautiful rendition of “So Here We Are.” Although I’m not all that well versed in A Weekend in the City (I just can’t get into it as much as Silent Alarm, sorry!), “Sunday” was sweet, two drumkits were brought out for a more mellow “On” and the band also ripped through “The Prayer.” Absolute bangin highlights for me were an amazing “This Modern Love”, the absolutely insane reaction of the crowd to “She’s Hearing Voices” and one of the encore tunes, “Helicopter.” Couldn’t help myself from leggin it into the mosh for this one! Check out this brief video of “The Prayer” (courtesy of sanfeypants, ta!) for a taster of the mayhem.