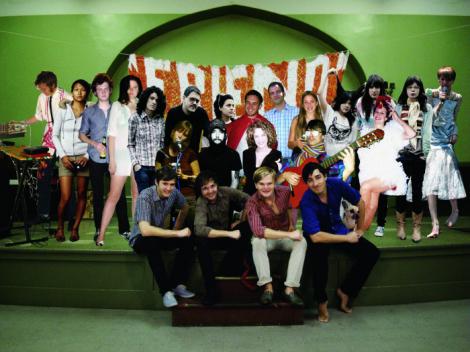 This stopgap 10 track EP features alternative versions, covers and other recordings from the Grizzly Bear canon. There is an electric version of “Little Brother”, a rousing cymbal-assisted crescendo choir version of “Alligator” with a little help from the Dirty Projectors and Beirut and an alternate version of “Shift”. What strikes me about these songs which are mostly radical versions, is the essence of song-writing around it, a craft in which Grizzly Bear have made leaps with each passing release. They have become mature arrangers/composers.

The lone Grizzly Bear cover is the Carole King / Phil Spector “He Hit me (and It Felt like a Kiss)” they have been playing for some time on tour and in a Daytrotter session way back. It’s a bruising atmospheric male spin on a traditionally female song and it works wonderfully.

Watch out for the hidden track at the very end of the EP, clocking in at just over a minute. It’s a collaboration between Grizzly Bear and Zach Condon and is louder than you might expect 😉 .

Grizzly Bear – He Hit me (and It Felt like a Kiss)