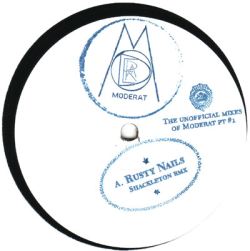 Two very different remixes here for you today that have been floating around the net for the last month or so.

A Shackleton remix of Moderat’s ‘Rusty Nails’ has turned up on an unofficial bootleg Moderat remixes EP (alongside Headhunter and T++). Taking the original’s beats and stretching the template from four and a half minutes of great electronica to a full nine minutes of sublime eerie, pitch-shifted despairing vocals and dark side of the sun ambience, it’s been hailed as his greatest work and Boomkat have called it one of the greatest records of the year.

It’s got a head-crushing dystopian feel. Wailing and firework crunches embellish the driving bass-synth and a clack clack rhythm. This is the kind of tune that Thom Yorke is aiming for. An epic remix that is happier spinning on its axis for its lifespan than taking off into the stratosphere.

The delightful now Mercury-nominated Speech Debelle. The girl is so nice she allegedly even left a comment on her album’s State review thanking the reviewer John Butt for the positive words. Her Speech Therapy album is a refreshingly old-fashioned hip-hop album with a young girl focusing on life experiences over braggadocio set to a nice mix of acoustic guitar, brass and keyboards. This remix is markedly different though, much more dancefloor orientated.