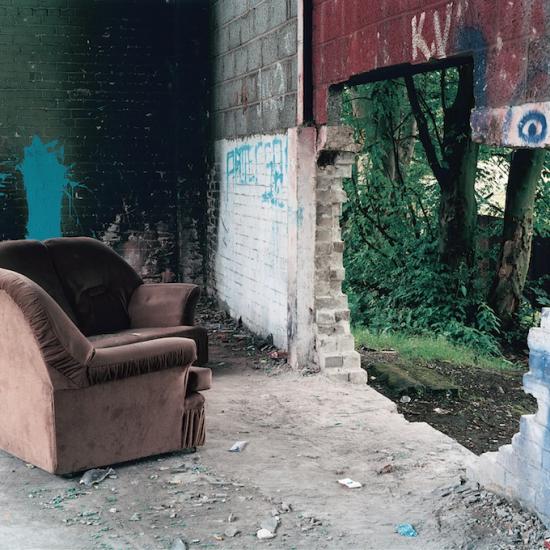 Jon Dark and Julie Chance’s music as Kool Thing to date, has shapeshifted in forms between a range of touchstones: elements of ’80s electronic, ’90s indie, brooding cold electronica and everything in-between. Constant throughout has been the presence of both members’ chanting double vocals; distinctive and hypnotic.

The Berlin-based band’s self-titled debut album solidifies the identity  of Kool Thing by honing and zooming in on those aspects 14 tracks and 50 minutes of music. Joined now by a drummer in Valentin Plessy, only two of the tracks ‘The Sign’ and ‘Light Games’ were previously released, the other main track ‘Plan.Life.Go’ is not present, presumably because it doesn’t fit this album’s pervasive mood.

And that mood is a escapist one with lyrics that conjure the idea of eloping, of existing on the fringes of a world, in the shadows. Musically too, the music breeds that star-crossed sentiment, created by a subtle mix of Ladytron-style synth atmospherics, tense guitar passages, ’80s-style indie-rock production and hypnotic rushes of electronic subtleties.

What makes it hang together as a cohesive whole are the duo’s allowance to let the tracks take diversions into the Vangelis-esque soundtrack drama of ‘Vestebro’, ambient interludes ‘Origin I/II’, the shoegazing synth-pop of ‘Floor Visions’, menacing cloudy Holy Other-esque pitch-shifted ‘The Sky, The Sea’ the breezy new wave dancefloor rhythms of ‘TV Tower’  or the crystallised electronica of ‘Lost Days’.

The constant of the double vocals can lead to  fatigue across the album as a whole especially when there’s so much flavour on offer on the tracks, but ultimately, it’s a bold and unifying characteristic  for an album which crosses stylistic differences and is hard to define by any one genre shorthand.  The long player format suits Kool Thing’s music, allowing them to explore in more depth than on previous EPs or single tracks, in richer, more emotional and inventive ways than their music initially suggested.

Kool Thing launch their album this Saturday in Button Factory at Hidden Agenda before going to SXSW in Austin, Texas next week.