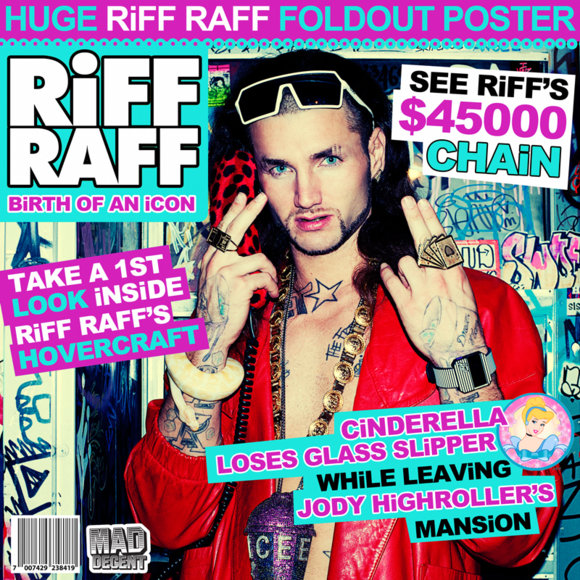 One look at RiFF RAFF and you’ll be expecting the punchline. If you put a team of comedy writers together in a room and told them to create an eccentric white Texas rapper, RiFF RAFF is what they’d come up with. A point re-inforced by Harmony Korine’s Spring Breakers film which will feature James Franco in a role that appears to be inspired by RiFF RAFF.

RiFF RAFF wears gold grill teeth, rocks braided hair, those coloured contact lenses and has MTV, BET and NBA logos tattooed on his body. Like Nicki Minaj, he’s got a character called Jody Highroller with a terrible English accent. When he gives interviews, he’s lost in his own world, playing with ours. Rap game Lee Scratch Perry.

His peculiarities manifest themselves perfectly in his rap voice. His Southern nasal drawl is distinctive. You may have first seen or heard him on Kitty Pryde’s ‘Orion’s Belt’ but it’s taken Diplo to put focus and effort on moving him on from that WTF? level.

Diplo recently added RiFF RAFF to his Mad Decent label at a supposed eight-album $3 million deal and the man who has helped artists like M.I.A. and Santigold attempts to repeat the introductory mixtape trick with BiRTH OF AN iCON.

Track productions from Major Lazer, Caspa, Flux Pavilion, UZi, Fat Pimp and Paul Devro free up RiFF RAFF to showcase himself in the best light against a mix of rap, dubstep-style and electronic productions and BiRTH OF AN iCON is a super-fun collection of songs as a result.There are hooks, there are melodies, there is singing, there are non-sequiturs galore and there are guests in the form of Action Bronson and Chief Keef.

Yes, it’s frequently ridiculous, it trails off in the second half and there’s more than a tolerable amount of jumpstyle on Davoodi’s Major Lazer remix but that style is as audacious as RiFF RAFF himself so it works. BiRTH OF AN iCON is a fun introduction to a magnetising character.

A Dark Horse – a cinematic and immersive Dublin folk duo

Listen to the debut album from Wicklow’s Croupier