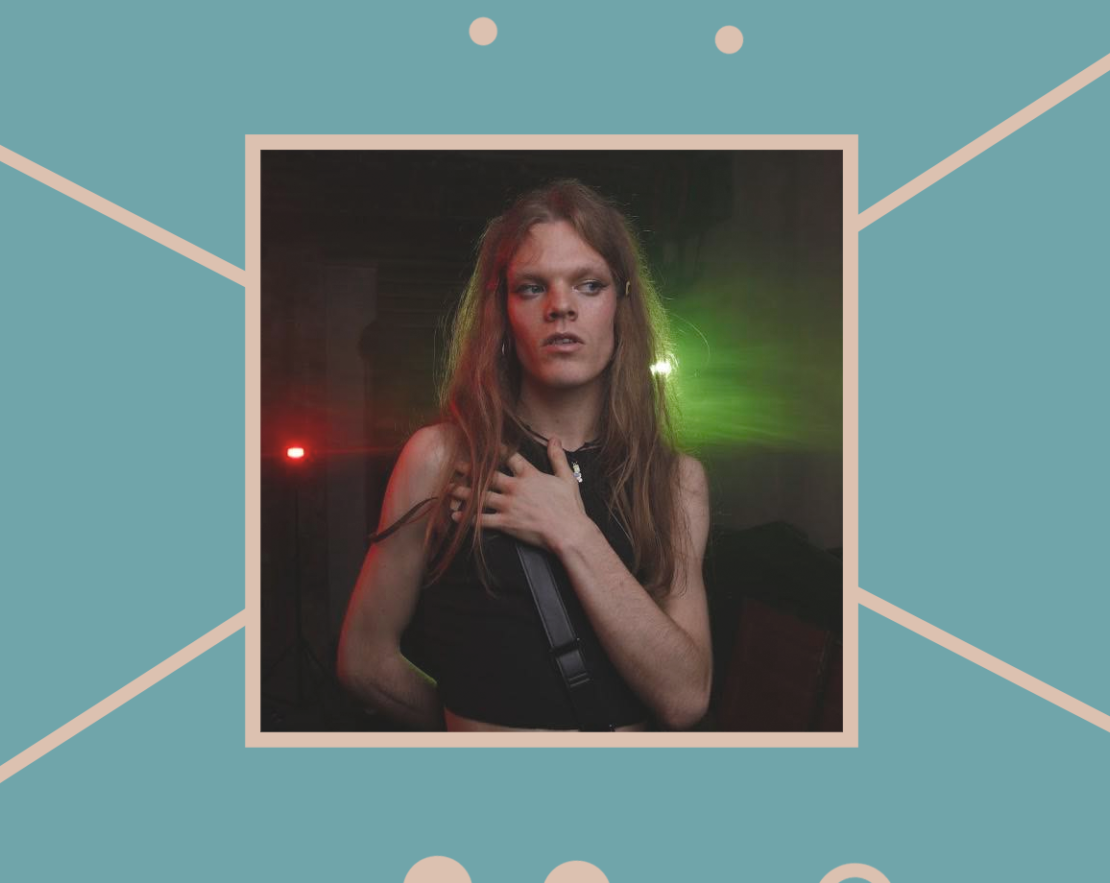 Roo Honeychild is one of Ireland’s fastest rising DJs. The Club Comfort resident and co-founder has built a preceding reputation with her blistering club sets blending pop aesthetics with a range of rhythmically crushing genres like Hard Drum, Baltimore Club and hip-hop. Roo (and her Club Comfort co-conspirators) have forged an important and inclusive space for queer club heads over the last three years and this year saw her make radio appearances on the likes of Rinse FM and Red Light Radio Amsterdam. Catch Roo at one of Club Comfort’s final events of the year – Club Comfort’s 2nd birthday and their New Year’s Party with Thrust.

Australian producer Emily Glass has weighed heavily on my emotions this year. From uplifting trance risers to spectral ambiance, her tracks are incredibly pretty and evocative, filled with subtle texture and entrancing melodies. Glass released SNOWDREAM, a moody piece of ambient jungle, herself, on her Bandcamp page, back in early June. I remember listening to it in the early hours of the morning, raucous breaks, ghostly harmonies and choral synths transporting me to the eye of a heavenly blizzard. I was moved to, with Glass’ permission, make my own tacky vocal edit, blending it with a studio acapella of Genie In A Bottle by Christina Aguilera.

Cork producer Doubt’s Steam Cycle EP was a standout release for me this year, especially its title track. He sent me an early version of this one over a year ago, and I noticed its crushing potential from the first minute I offered it up to a dancefloor. Thudding kicks and thumping toms drive swinging hips, contemplative melodies, countermelodies and harmonies capture the mind and engages you in a hiraeth soundscape, euphoria tinged with sorrow. It is a prime example of Doubt’s unparalleled fusion of avant-garde rhythm and classical musicality.

‘It’s Like That’ was one of those pure summer bangers that sets the tone for a whole season. I’ve heard it played everywhere in Ireland since before its release on Dublin Digital Radio’s second compilation back in April. Dublin native, and my Club Comfort partner, DJ Selky wears his influences from UK Funky and South African Bacardi House styles on his sleeve with this one, and it really sees him at his best. The lead melody is unbelievably catchy- it’s like 9PM (Till I Come) by ATB, if you’ve heard it once you can sing along, and big crowds of dancers instinctively do! Bacardi snare patterns and Afro-Caribbean percussion demand movement, whipping the dance into unified tumult. Selky has multiple forthcoming bangers on Paris via London imprint Moveltraxx, they’re all incredible. Keep your ears pricked, believe me when I say you should be excited!

Technically this counts as a late 2018 tune, but I’m letting myself away with it as this one has only had time to prove itself in the subsequent year. Tre Oh Fie and his associates are really shaking up South Florida dance and hip hop right now and are some of the most exciting producers in the world to me. Back to Miami Bass and further, So Flo has been a remarkably fertile region for underground hip hop and dance music, a melting pot where many cultures find musical confluence.

The social meeting of (American) football, music and dance characteristic of the region is clear in ‘We Got Dat Fie’. Drumline-esque marching band drums keep the groove alive over a half time tressilo kick pattern. Celebratory, show-boat sporting chants form the weight of the vocals: ‘Whole team / On Fie’. A smooth flute-like pad adds the colour characteristic of Floridian hip hop production. I often see So Flo producers post videos on Instagram of local football heroes throwing down local dance moves invented for their songs post touch down.

I’ve cried to this one more times than I’d like to admit since its release in May. I’ve been a massive fan of Dublin native Gemma Dunleavy for several years now, and, since the last two, I’ve been lucky enough to call her my friend. Having been originally enticed by her pristine vocal work for many of my favourite producers (Murlo/Sharda, Orlando, Swing Ting, Clu etc.) it is beyond gratifying to see the spotlight shine firmly on her as a solo artist.

‘Better 4 U’ is a silky, dreamlike RnB jam on a half time beat. Heavenly harps and flutes swirl around Dunleavy’s tale of heartbreak, all layered on an 808. It’s pure magic, and the lyrics go straight for the heart like a shank: “I can make it better for you, let me fix what you broke before / everything we went through… Let me make it better for you, just tell me what I need to change and I’ll fix it for you.” This one is above and beyond the standard for Irish pop music of the past decade, let alone the year.

Here’s another tear-jerker. I’m about 90% certain I was the first person to hear this tune, aside from Bambi herself. I was cooking a late breakfast for myself one day when she sent it over to me and I shed tears into my French toast on the first listen, no messin’ [sic]. This is one of the few truly ambient pieces of music to capture my attention during a year where I mostly just battered my ears.

Collaging the intro to ‘Bliss‘ by Mariah Carey, choral voices, bird sound and a burning fire, it’s three minutes and two seconds of audible emotional care. Everything is warm and topped off with musical fairy dust. I listen to this track when my emotions are backed up and I feel dense and blocked- it has a way of unwinding and unlocking your feelings. There’s comfort, hope, and happiness, all tinged with undeniable hints of hardship & loss. No more fitting musical metaphor for an optimistic and yet trying year.

(Even The Strong, available here)

MM’s first solo record on Even The Strong was a highpoint for the label during a year of consistently strong releases. The Glasgow based producer has been one of the key progenitors and flag bearers of the so-called Hard Drum sound which bubbled out of the UK in the second half of the 2010s.

Terrible Muscle is a pure riser, a seemingly endless build-up of latent percussive energy without release. For this, and other reasons, it is an unbeatable DJ tool with unmistakable purpose: create tension and hype that crowd up. For a track that is almost entirely made up of drum hits, MM manages a surprising control of tone and depth of texture. Carnaval percussion is tuned to perfection and the subtle but satisfying hiss of bitcrush FX topcoats the mix. I’ve heard DJs from both sides of the Atlantic drop this one in

On her new EP, Italia via London up and comer Nara deftly takes the Hard Drum sound straight to one of its logical potentialities- a kind of Hardcore Drum- drawing on European rave traditions of hard dance such as Gabba, Hard Trance and Hardstyle. With several previous releases on Manchester’s Super Kitchen imprint she is, definitely, one to watch on 2020. The EP features a stellar remix from Great Corkonian Hope Syn.

Flood affiliate Syn is widely recognised as one of Ireland’s most exciting emergés of the late 2010s, with a a keenly awaited forthcoming EP on Even The Strong. In this remix she irons out the structure of Nara’s original for a no-nonsense descent into the darkness and intensity. There’s a bouncy bassline, distorted gabber kicks and screeching textural samples which whirl around your head. In line with her label mate MM, there is an obvious attention to melodic qualities and tones in what is mostly percussive music. It clearly references the glossy pitch perfection and bitcrush bombasticism of Hardstyle.

Mastalgia, by Dublin artist/producer/DJ Bitflower Bb (aka Dream Cycles) was another unexpected standout for me this year. Not that I would ever doubt her creative ability. The whole release is an intent exploration of softness through pastel-pop soundscapes. The lead single, Blue Fire, achieves equal beauty in audio and visual forms. Orchestral strings, wind chimes and bells all hum with a warm resonance while Bitflower Bb’s soft-sung vocals float in half time meter. Pop melodies drone and reflect through reverb and delay like light fractalizing through a prism.

The instrumental is a soft wall of sound- it feels like an updated form of the best of 90s shoegaze and dream pop. Bitflower Bb’s self-directed music video features close-up shots of her singing lips and moving hands superimposed in ghostlike fashion over ocean waves, flowers and rustling leaves. The visual and sound, each praiseworthy as a standalone artwork, combine to form a product as emotionally imminent as it is aesthetically ethereal.

A stellar B side to Cork via Limerick artist Tension’s latest single on Flood, called Catalyst VIP. Dominated by a steady tressilo groove, creepy washed out vox-like samples and subtle but extremely effective low frequency programming, this one’s a tension builder.

Tension trades up the carnaval drums typical of many drumheads for a decidedly more North African sounding pallet. There’s a distinctly thick hit to these drums, and Tension fits frequencies that could easily become a distorted mess together with surgical precision. A sense of moodiness and intensity grows throughout the four minutes and thirty-one seconds, taking one on what feels like a journey upriver into some dense and unforgiving rainforest. This is another track with serious purpose on a dance floor.