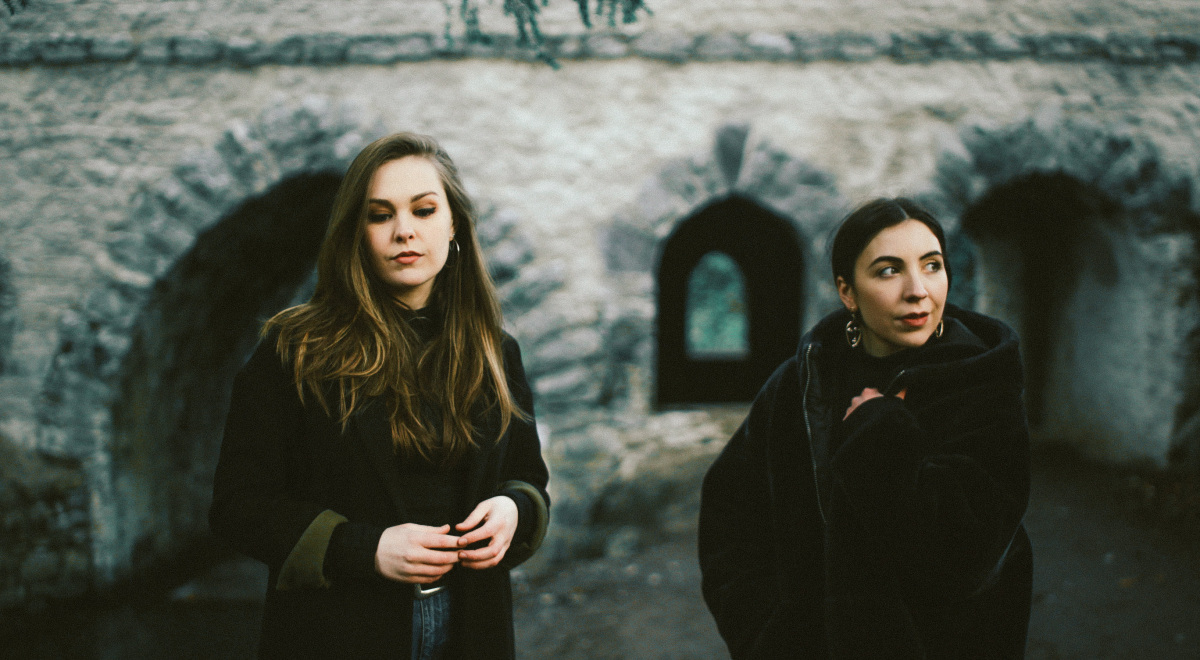 Morgan MacIntyre and Gemma Doherty from Derry and Belfast met in 2014 at Trinity College in Dublin where they quickly became friends and hit upon a unique sound of harp, synths and harmony. After a series of singles, and preview tracks like ‘Tin Man’, ‘You Never Call’ and ‘Twin Peaks’, the band’s debut album Shape Of Silence is much anticipated. So, how do they fare?

In short, superbly. Shape Of Silence delivers on nearly every front that a debut LP should.  There’s more than enough by way of radio-friendly single material to attract a wide variety of new listeners and plenty of deeper cuts to satisfy to the appetite of longtime fans.

Looking at the album’s tracklist betrays a little of the group’s high ambitions for the project. Of the 12 total tracks on the LP, nearly the entirety of the first half is comprised of previously released singles. These songs are easily the catchiest and most universally accessible the group have produced and are clearly grouped together to be aimed at easing in newcomers to the band.

This cluster holds much of the album’s strongest material. The eerie ‘Tin Man’ is the perfect follow up to the jubilant ‘Twin Peaks’. Thematically, both examine the idea of companionship. Yet where ‘Twin Peaks’ rejoices in the idiosyncrasies of a specific friendship ‘Tin Man’ pangs with the loneliness of dependency “But the Tin Man / Will not desert me”.  It’s a connection felt so strongly that it verges on almost obsessive expression. Two very different sides to the same coin.

Among the group’s best assets is their ability to create an atmosphere in their instrumentals. The collision of vocal harmony, padded synth and plucked harp on the second half of ‘The Beginning’ add much-needed depth and character to an otherwise unspectacular introduction. Both Doherty and MacIntyre are supremely talented singers, whose chemistry underpins the entirety of Shape Of Silence.

Even in the few moments where the albums fails to live up to the group’s potential, the duo’s shared vocals retain a ghostly presence which lifts the material out of the mundane.  The aforementioned introduction track and later ‘Corpses’ come to mind. The latter is perhaps the weakest track on the LP, the repeated refrain of “We all stood together/ For worse or for better” fails to deliver enough emotional weight and the melody which it carries verges on forgettable.

These moments are few and far between. Doherty and MacIntyre are cunning songwriters. Ones whose sense of melodic shape and craft in wordplay have a transportive effect.  ‘Madrid’, a song which returns listeners will spot from a previous EP, is a perfect example. The track is littered with double meanings and run on lines which defy the expectations of the lyric which directly preceded it. “I’m glad I don’t know/ Where you go / Where you go/ When you’re lonely / I would only meet you there.” This, set atop a foundation of haunting falsetto harmonies and pitched vocal samples creates an evocative and uniquely intimately end product. It’s a standout moment on the album.

The album does feel like the work of two very distinct halves. Each of the two is linked by an ethereal beauty, a calling card of Saint Sister’s work, but otherwise, seem only distantly related. The shift comes just after ‘Tír Éile’, which is the most overtly folk and minimalist track on the project. The remaining six songs feel definitively darker in tone and content than the six which came before.

These tracks are also far more based in the realms of electronica than the rest. ‘Steady’ is a highlight moment. The programmed percussion and background spoken word mark the song as the group’s most experimental to date.  There’s an ambient blanket thrown over it amd the synth tones are reminiscent of something Eno might have used on Music For Airports.

Shape Of Silence’s B-side culminates in the broody and almost morbid ‘Half Awake’, a rejection of a romantic figure. It’s one of the only times Saint Sister explicitly go on the offensive throughout the LP and the song has a vocal delivery as passionate as the end result is harrowing.

While the first half of the album is definitely more radio-friendly and will provide more instant gratification to first-timers, it’s this second half which provides the most depth for repeated listens. It has the most daring sonic exploration, provocative lyrical content and widest variety in the emotional spectrum of all their material. If you were to pick elements from Sound Of Silence that the group could dig deeper into going forward, it would be on the back half of the project.

‘The Mater’ is a sublime album closer. One which showcases the electric chemistry both Doherty and MacIntyre share vocally and the hushed magic of their songwriting prowess together. It’s a song that gets to the heart, no pun intended, of what Shape Of Silence as an album and Saint Sister as a group are all about. That is, the beauty of a moment shared between two humans.

Saint Sister play the Olympia Theatre on the 11th of October. The band’s debut is out October 5th.