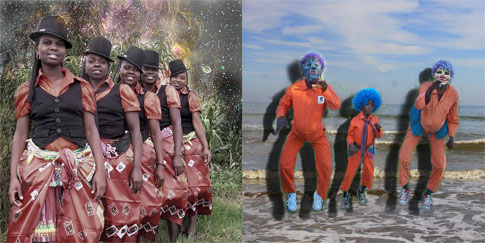 Since I first met up with Shangaan Electro producer Nozinja in Johannesburg in 2010, the ultra fast-paced marimba electro music was an unknown phenomenon. Since then, thanks to an Honest Jon’s compilation and lots of media coverage, Nozinja and his team of dancers and singers have toured Europe, Australia and made appearances at Damon Albarn’s Another Honest Jon’s Chopup gigs in October last year alongside Fatoumata Diawara, Flea, Hypnotic Brass Ensemble, Tony Allen and Theo Parrish.

Buy them at eMusic and on iTunes (US only).

Meanwhile, Honest Jon’s are pressing on with their Shangaan remix project which has already seen the likes of Theo Parrish, Oni Ayhun, Ricardo Villalobos, Burnt Friedman and Peverelist have a go. A double CD entitled Shangaan Shake will be released on February 27th featuring those remixes and more from Actress, Hype Williams and Demdike Stare.