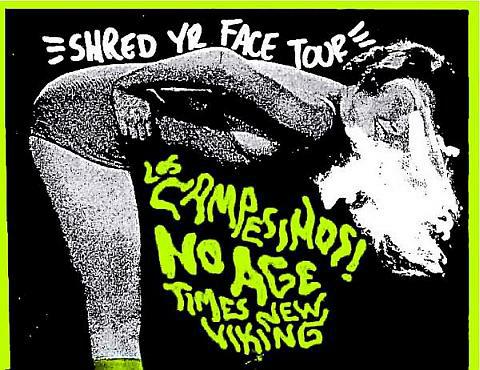 Can you judge a grandmother’s love by giving it 2.5 mics?

Times New Viking (8pm), No Age (8.45pm) and Los Campesinos! (9.45pm) in Whelan’s, tonight. Only a few tickets left for this so beware. I’m quite looking forward to it now. Times New Viking were pretty loud and quite humourous at Primavera, I’ve really warmed to No Age in the last while and despite Los Campesinos! first album not being something that I liked at all (AT ALL), their second album We Are Beautiful, We Are Doomed released eight months after that debut is a doozy. A much less annoying (but still occasionally cringeworthy lyrically) affair. It was produced by John Goodmason who also produced the Fight Like Apes record. I keep thinking of them as a Broken Social Scene Junior these days.

Los Campesinos! – We Are Beautiful, We Are Doomed

Pre-order We Are Beautiful, We Are Doomed from Amazon.

The bands are blogging and uploading videos of the tour at http://shredyrface.com/

Watch Los Camp! are soundchecking the song on Wednesday after the jump.