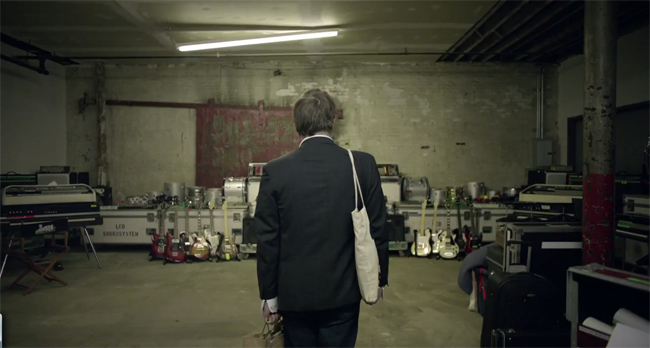 “If it’s a funeral, let’s have the best funeral ever.”

Watching a concert film is nothing like the real thing. It’s difficult to convey the body heat, the sweat, the pint spillage, the bumping, the energy, the euphoria and the emotion. Shut Up And Play The Hits, a film by Will Lovelace and Dylan Southern centred on LCD Soundsystem’s last days and their final show at Madison Square Garden in New York, does a fine job of conveying much of the heightened atmosphere in the arena on that night in April 2011 but it’s ultimately pre-occupied, via interview and post-gig aftermath footage with why James Murphy would decide to end LCD Soundsystem at their height.

At the start of the film, Murphy is interviewed by Stephen Colbert and asked why he is walking way. “There’s only three ways to end your career as a rocker: overdose, overstay your welcome, or write Spiderman the Musical,” Colbert jokes. To put an expiry date on your band is the opposite of a rock’n’roll cliché and Murphy is steeped enough in pop culture to know how to avoid those things.
Throughout the film via snippets of a searching interview with Chuck Klosterman, Murphy namechecks David Bowie and Nick Cave and talks about how he could never be as cool as these megastars when he was younger but he has been pretty much trying ever since.

It’s been the ethos for LCD Soundsystem in general. There are fantastic songs in the LCD discography but there was always the feeling that the band was an exercise in exploring what had gone before. Whether it’s post-punk, disco, club, rock or funk, LCD’s music always contain a big wink and nod to the past.

Murphy himself was like a reluctant superhero. He is a normal guy. There’s no mystical makeup to his core, there’s no enigma, just a dude who really likes coffee, likes walking his dog and has made some of the best dance music in the last 10 years.

Which is part of the film’s problem with exploring the why of the end of LCD Soundsystem. Murphy has and always will be in control. LCD Soundsystem is his band, the other significant players, Nancy Whang, Pat Mahoney and Al Doyle, don’t really get a look in. The film’s narrative when it’s not at the concert focuses entirely on Murphy and he’s too self-aware for the exploration of the why to work. He knows already. He’s in control. He was done. He wanted to do something else. No attempt from Klosterman to place some grand idea on the end of the band changes that.

Regardless, can we really look back at something and try and explain why when we’re so close to it? It was only last April when the band played Madison Square Garden and closed the curtain on LCD. One of the things Murphy said in the Q&A after the film when asked whether he missed it, was along the lines of “Not yet. It doesn’t make a difference yet because it’s the same normal pre or post-album time,” so it’s too soon for all of us. Not enough time has elapsed for nostalgia to work its way into the film. Sure, Murphy DJed and Al Doyle played with Hot Chip at Electric Picnic last weekend so the distance required to ruminate on the finality of the band is not quite there.

The best the film can hope for and shows, is the aftermath of the gig, taking in the footage of a very hungover Murphy the day after, deflated from making such a big decision. It’s an immediacy that’s easy to relate to.

The title of the film is a bit of a warning for the film in general, there’s just not enough of the gig. I watched the gig stream, the day after it took place last year and what struck most was just how good the 29-song near four hour setlist actually was. It was a glorious funeral, a celebration and a last play of their big tunes but also some of the under-appreciated numbers like the cover of Alan Vega’s ‘Bye Bye Bayou’ and the performance of the 45.33 Mix in full. How good the gig was, is somewhat lost in the attempt at finding meaning in Murphy’s decision.

However, Shut Up And Play The Hits is a beautiful document of what happened around the band’s last show, with memorable small moments in the exchanges between band members, the kissing couple in the audience, the giant mirrorball reflecting around the arena and the inconsolable crying fan. The live sound, mixed by Murphy himself is superb. The attempt to ask why gets in the way of the energy of the film somewhat but if it’s a problem for you, remember that the physical release of the film features the full standalone concert. You wanted the hits? Wait for the DVD.