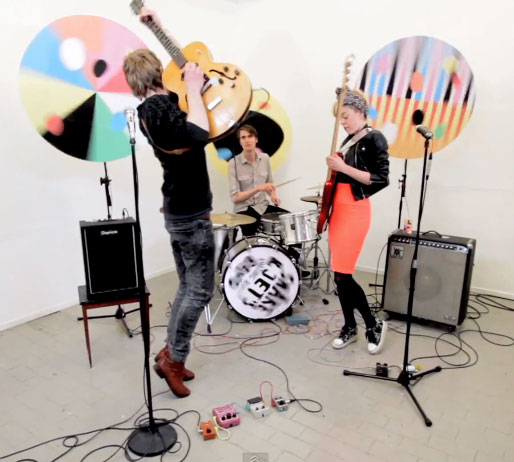 Swedish/ Dublin design duo M&E have made their first music video since Jape’s ‘I Was A Man’ ( I think). The video for ‘Black Egg’ by Denmark’s Snake & Jet’s Amazing Bullit Band has the effect of a band going through the tumble dryer. It was inspired by the band’s album title Stuff That Rotates. How they did it below with a behind the scenes video.

Using the motion of rotating or spinning we came up with the idea of creating a device which spins the camera, turning objects and people into blurred shapes and trailing colours. Abstracting normal situations by distorting them.

We built a device powered by an electric drill, constructed from bicycle and drum parts, wood and metal plates, which was strong enough to allow us to rotate the heavy weight of a Canon 5D MKII stably and at a very high speed. The drill was plugged to a variable speed controlling device, allowing us to adjust the speed of the cameras rotations by turning a dial.

The setting of the video is the band performing live in a studio set. Almost like a 1960’s live television show performance.

The main camera rotates at a selected speed as they perform. While the camera is rotating, objects such as the skin of the bass drum start to rotate at the same speed as the main camera, giving the effect of those objects becoming static in the frame while everything else is spinning. When a person stands in front of these objects it gives the effect of the person spinning rather than the background.

Other circular boards with graphics are turned on and off running in and out of sync with the main rotating camera.  Each of these graphics have variable speed control dialsto adjust their speed.

There are no effects added to the footage in post production, all effects were created by the spinning of the camera.