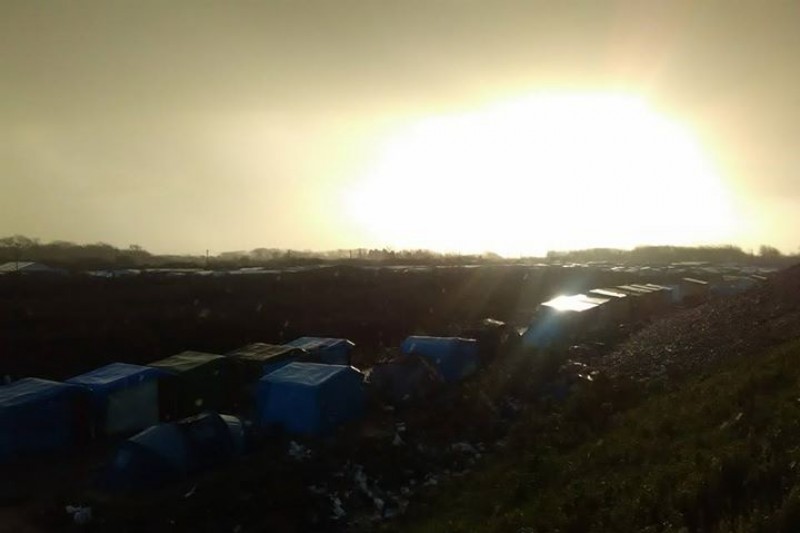 Calais Field Music is a project created by Irish woman, Isolda Heavey, as a way to help refugees within the camp at Calais earn their own money by sharing their musical talents. The proceeds of the sale of the music goes directly to the camp’s artists.

Last October, Isolda joined the Cork to Calais convoy, with ‘Ireland Refugee Solidarity’ and has now spent more than five months with their support travelling between Ireland, Greece and Calais, documenting the plight of refugees and showing the very real, human face of the suffering within these camps, in addition to raising money which goes directly to the camp’s inhabitants. Last week, while walking through the camp to find those who were unable, for a variety of reasons, to seek out the distribution queues within the camp, Isolda and her colleagues met a group of young boys who called them over saying, ‘Come, Sudan music’. The boys welcomed them to their makeshift home and began singing and drumming. Two of the boys, only 17 years old, danced and mimed actions to explain the meaning of the song
they had written. As the song went on, it quickly became apparent that it was written about the misery of living in the camp in Calais and police brutality they are forced to endure. ‘They alternated between the roles of CRS police using pepper spray and camp refugees in hiding.’ Isolda explains. The song was called Abbas Halla. (Enough, Police.)

‘Over the course of the week we spent many hours with them chatting,
singing, sketching, eating, drinking sweet tea. The music sessions were
like a ray of sunshine in the increasingly dire conditions, three days of
non-stop rain. They would always greet us with a warm shoulder bump and
handshake, escort us around the camp if it was dark, share their food with
us and shelter us from the rain. We began to realise that they had very
little… one phone between them, inappropriate footwear for the weather,
no socks, no jackets and very little food shared between them. Then we
found out that one of the older boys volunteers every day in one of the
camp kitchens. Like some others we met in the camp they don’t attend the
line distributions for clothes and food and like to keep away from any
potential confrontation (especially for the younger boys). We helped them
with the clothes and food that they needed.’ Isolda says.

This meeting and growing friendship sparked an idea, a way for people to hear the music originating from the many different cultures residing at the camp, an opportunity for these musicians to earn a small income to enable them to purchase basic necessary items rather than relying on charity. Giving people a level of autonomy and a sense of dignity, whilst sharing their rich and diverse culture of music and arts.

With this in mind, Isolda set up Calais Field Music. The initial recordings are of the boys mentioned above. Whilst the boys remain anonymous, artist Liam Hourican, also in the camps, sketched them, the sketch appears on the Bandcamp page. The project began to take shape, with thanks to the advice, support and assistance from Ireland Refugee Solidarity and other people involved in assisting and aiding the people within the camps.

So far, with some shares on Facebook, they have raised €332, all of which will be given to the boys directly on Isolda’s forthcoming trip to Calais on Thursday, 14 January.

‘On my next trip, I can’t wait to give the boys the proceeds. They have heard about what we are doing and they are very excited! It is money that they have earned – and the return for those who purchase the music is not only that they are giving directly to some of the most marginalised of people, but they can also enjoy some incredible music and give the artists a very real sense of dignity. On my next trip, I will be recording music from others within the camp, which currently holds over 6,000 refugees. This music will all be uploaded, again with all the proceeds going directly to the camp’s artists. This is solidarity, not charity, which is so important.’

You can hear the songs here: http://sudanfieldmusic.bandcamp.com/album/abbas-halla

If you wish to donate directly to keep this initiative going please have a look at GoFundme.