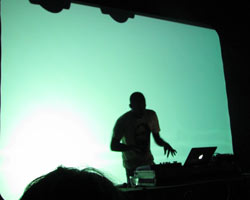 The gauntlet has been thrown down. South by South West is upon us once again. Over a year, the impact of this massive music festival in Austin, Texas can diminish since your last visit, but oh lordy, make no mistake, Austin is the music town. Amongst 2000 bands, 12,000 official attendees and the many more who lined the streets of Austin yesterday for Paddy’s Day, it was the kickoff for 96 hours of non-stop gig madness. Here’s a taster of highlights for day one:

The Morning Benders
The swooning San Franciscan classical indie-popsters thrilled a capacity crowd at Emo’s (really a big low-ceiling shed) at BrooklynVegan’s day party. Think Grizzly Bear jamming with Vampire Weekend. ‘Excuses’ was phenomenal and an extended a cappella middle lifted the song above all else in their set.

Frightened Rabbit
After falling in love with their new album The Winter Of Mixed Drinks album, I was really keen to see the Scots live. Unfortunately, due to gear problems at the Paste Magazine show, the big-sounding dynamics of the new album was forfeited for a quieter, more-acoustic show. It didn’t thump as much as it should have but the emotion was still there, with ‘Living in Colour’ and ‘Swim Until You Can’t See Land’.

Nice Nice
The first band up at the Warp showcase are about to deliver the superb Extra Wow album. Their set tonight bore no resemblance to the dizzying rhythms of that album and instead focused on a more freeform jam show where electronic drums, samplers and an echoplex gave them a layered and fractured pulse.

Pivot
With a new album on the way in June, this blog’s favourite Australians were in new-song mode and you’ll hear no complaints from me about that. The new songs are more dense, more intricate, more layered, darker, maybe even more experimental. Oh, yeh and Pivot now have vocals on every track and it sounds wonderful.


Villagers
Conor O’ Brien has the ability to make you want to write poetry. Such is his attention to songcraft and words that even hollering six-foot Texans can’t help but give the “this guy is incredible” speech to their mates. Stunningly good.

And So I Watch You From Afar
Amazingly good as always. Headbanging up front at the Irish showcase thanks to these guys. They put their everything into all their performances and did enough to grab the attention of 50 passersby who watched them through the windows in awe on 6th Street. Even against all these bands playing at once, ASIWYFA dominated. Their basslines could be heard a block away – no joke.

Flying Lotus
Without a doubt, hands down, one of the best electronic music sets I’ve ever seen. Steven Ellison is rivalled only by fellow Brainfeeder and LA crew – Daedelus and Nosaj Thing in the performance stakes. Last night’s show was his first with live visuals in the USA and the flash-stutter effect of dots, limbs and obscure shapes was a winner.

Fly Lo’s music was already “next-level”, I think he may have just gone “next next-level” with the new material from Cosmogramma. Effortlessly mixing his unique and singular brand of whomping bass, intricate percussive rhythms and backsliding beats. What’s most impressive about him is his ability to turn the party out while still playing some of the most out-there music you’re ever likely to hear. Ellison himself has a jovial fellah, all smiles and laughter through – throwing shadow shapes, breaking poses and working between his AKAI and the mixer. His positivity was infectious, just like Daedelus. He aired plenty of his own productions taking in hip-hop, jungle, drum and bass, dubstep as well as re-interpreting tunes by Radiohead (Idioteque), Burial, J Dilla and Lil Wayne. He even managed to turn one of AFX’s Drukqs piano pieces into his own unique style. Absolutely breath-taking next next level stuff indeed.