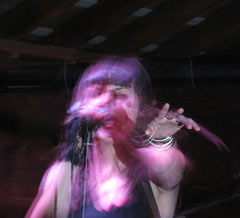 The final day of South By saw Perez Hilton party overshadow the official part of the festival, but there was still plenty of great music to be caught as long as the band didn’t cancel or move slots which seemed to happen a lot on Saturday.

Rye Rye
Almost a year to the day Rye Rye played SXSW for the first time. This year, playing around the block, it’s clear that the Baltimore club rapper and M.I.A. protege has improved muchly. Her performance is more assured and she joins in with her dancers moves as much as she can. An album is finally ready this summer so that will be the real test.

The Drums
Prepared for the worst after some dodgy reports and tunes since they burst out of their Brooklyn via LA hole, The Drums were impressive live, thankfully. Their sound owes everything to ’80s Manchester and ’50s arrangements but there is no other band like them at the moment. The live set is giddy ’80s pop complete with Smiths posturing, jerky posing from singer Jonathan and most importantly, tunes which you’ll be humming and whistling for hours afterwards. No mean feat when you’re up against 2,000 other bands.

Fanfarlo
Having completely forgotten that the London-based quintet were playing the festival, it was a nice surprise to stumble on them in a marquee near the Convention Centre on a freezing cold day in Austin, surely a weather anomaly. Fanfarlo specialise in Arcade Fire-esque crescendoes and they do it very well on their own terms with violin, mandolin, trumpet and big, reaching wistful choruses.

The Middle East
The band were so good the first time, another dose was required. This time, the set took place in the more sterile environs of the Austin Convention Centre. No problem for the multi-instrumentalist Aussie seven-piece who still released heavenly, emotional sounds into the cavernous dark room with ease.

Woodhands
A duo from Toronto who make dance-punk anchored by a propulsive drummer and a guy who plays a keytar without any shame or remorse for his deeply uncool instrument. Luckily, the tunes were good.

Best Coast
Bethany Cosentino is tired. Visibly so. Maybe a little cranky too. At Barbarella’s bar on Red River, she is keen to get her tenth and final show of SXSW over and done with. With a guitarist and drummer behind her, she rips through eight songs in what must have been 20 minutes. It could have been shambolic but it was not. Bethany’s voice is a smoky rasp that is perfectly suited to her basic poppy guitar rock riffs and it’s that primal feel that makes it very easily to love.

While the Perez Hilton party hopefuls queued around the block to catch Courtney Love and Snoop Dogg and the bustling Sixth Street finally showed some signs of dwindling numbers, the Pitchfork closing party in The Scoot Inn seemed like a good way to end the last night. Ignoring rumours about Jay-Z and Justin Timberlake playing the Fader Fort (not true) and Mos Def playing in a parking lot (true), we headed east over the interstate, down the railway tracks to the outdoor courtyard venue.

Bear in Heaven
It was so cold in The Scoot Inn, someone had wisely started two fires in one corner of the outdoor venue. It was up to Bear In Heaven to draw people away from the flames and heat with their take on indie-rock, shoegaze and electronica. This is a band who sound like nothing and everything all at once. Vocalist John Philpot’s ghostly voice lend the songs from debut album, Beast Rest Forth Mouth an psychedelic a hazy feel with reverb bleeding over into razor sharp synths and a robust percussion section. Hard to describe but fascinating all the same. ‘Lovesick Teenagers’ was a highlight.

Sleigh Bells
The band left to close out the night left no doubt that they deserve to be playing to lots of people at festivals worldwide very soon. Derek Miller and Alexis Krauss sent SXSW 2010 off right. It was a raucous affair, Miller providing low-end guitar riffs set to pummeling chest-rattling basslines while Krauss was agitatedly leaping around, fist-pumping and crowsurfing.

The band left us wanting to party a bit more so when a random school bus turned up outside, it took us to a ranch in South Austin where randomly, members of The XX, JJ, Tanlines, Lemonade and Holy Fuck were staying. We partied in a barn for a few hours before the same bus took us back into the heart of Downtown at 5.30am. I later found out it was rented by the label Green Owl, thanks to this NY Times blog feature about it. We love you Austin, til next year y’all.