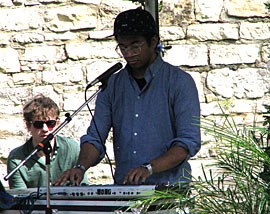 A mammoth day in which I caught a lot of bands. Here are the highlights of the Friday from Austin.

Local Natives
One of last year’s breakout hits of SXSW, this year the LA harmony-heavy indie band returned to the place where everyone knew who they were and wanted to see them again. In that year, as a band they’ve got tighter but if you were at their recent Dublin show you’ll know that already. North America has been slow to catch up on the Local Natives buzz but with their album now officially released Stateside, the audiences were a lot more appreciative of the material.

Mountain Man
Three girls huddle around a trio of microphones and wonderful things happen. Amelia Meath, Molly Sarle, and Alex Sauser-Monnig are based in Vermont and their sound is rooted in the North American music of blues, country and folk. Singing all their songs acappella bar one with a guitar, their crystal-clear harmonies are what draw you in as their sweet voices chime in unison. Many of their songs could have been sung in 1920 but still sound fresh to these modern ears.

Memory Tapes
Davye Hawk’s solo project is many things: electronic, wistful, nostalgic, Balearic, independent and lo-fi. Live, it’s a much more focused approach; a drummer, a minimal backing track and Hawk playing guitar and singing in a brittle timbre. I would have liked to see more of this show to be sure but I was impressed with what I caught.

First Aid Kit
The Swedish sisters have been doing their thing for a while now that they have probably been playing at a festival you’ve attended. Here, they were the perfect soundtrack to sitting down on the grass soaking up the sun.

Toro Y Moi
Oh dear. While his debut album Causers Of This mixes J-Dilla style cut-up beats with spectral synths (hereafter known as chillwave), Chad Bundick’s live show has a lot to improve upon before it is to be recommended. Playing solo with just a synth, vocals and a backing track, the show was unfocused. Occasionally, when he sang it came across as indulgent noise which is a pity as he has the skills, they just didn’t translate during his set at the French Legation Museum. It wasn’t helped by the outdoor stage’s complete lack of dynamic bass either.

Mayer Hawthorne
A smooth nerdy, be-speckled operator, Mayer Hawthorne and band know the right way around an R&B groove, passing out sunshine-inflected jams to “make babies to” in the words of Mayer himself.

Dam Funk
Modern gangsta funk is an intriguing concept in theory but as Dam Funk’s mammoth 5-LP album Toeachizown last year proved, it can be a sporadically edifying concept. Edited down to a live 30 minute set, makes it a goer. Dam controls the show with his gravel-voiced croon which is something he neglects to do on record. As a result, Dam Funk was a bumpin’ ride through Cali with the rooftop down and sunglasses up.

Dum Dum Girls
One of the disappointments of the festival personally (they didn’t bomb as much as Salem and JJ) but maybe scuzzy lo-fi rock with girl harmonies just doesn’t do it for me. Failed to keep my attention live but their album is a more rewarding listen. Maybe they just appeal to journos and industry heads who like lo-fi girl groups in matching tights?

Holy Fuck
Returning to Austin with a new album on the way, you would expect plenty of new material from the Toronto band but through accident or design over two shows, I only caught one new song. It was brilliant but then I shouldn’t have been surprised after gloriously tight renditions of ‘Frenchys’ and ‘Lovely Allen’ were better than ever before.

The Golden Filter
With pagan-esque visuals and artwork shrouding them in an aura of mystery, the New York two-piece (supplemented by a live drummer) still manage to keep an air of mystique about them. Lead singer Penelope spends the entire performance with her hair in front of her face, stomping her feet to the disco beat while Stephen Hindman bangs extra drums for effects when not occupying the synth-playing role.

Bachelorette
New Zealander Annabel Alpers has not one but two laptops on stage for her set. Her thing is one-woman electronic-based ballads with a Korg and some extra sweetness. Hardly mindblowing but a pleasant introduction to her music.

Whomadewho
These Danish chancers have had three albums out so far but are only really building up their reputation through their solid ’80s-inspired danceable live shows complete with slide guitar and braces worn by each member of the group. Imminently fun.

Tanlines
I’ve been in love with their debut EP Settings for the last few weeks particularly the clinching ‘Real Life’ so it was a delight to catch them live. The Brooklyn pairing of Jesse Cohen and Eric Emme make “calypso disco electro music” and it sounds as good as it is described in a car park outdoor stage at night-time.

Broken Social Scene
Seeing as the Canadian supergroup are one of my favourite bands of all time, there was excitement in the air when no queue to get into their show meant I was going to be there for their set, despite having to wearily stand through a cheesy set from singer-songwriter Jason Collett. By the time the band arrived, I had been on my feet for 13 hours straight and feeling the effects of a full SXSW experience. When Kevin Drew announced they would play for over two hours after a quick intro from poet Tax Douglas, a part of me said to myself “AMAZING. I’m in luck,” while my body said “We’re not putting up with two more hours sir”. As it turned out, I lasted an hour of the show.

Compared to elated Broken Social Scene gigs in Ireland, it was a dampened affair, no doubt aided by the band’s early, leisurely pace. Hits like ‘Superconnected’ and ‘7/4 (Shoreline)’ were dispatched early with little reaction from the crowd. New song ‘Texico Bitches’ was a promising new number with a more direct swagger than previous material. Kevin Drew asked the crowd to put cameras away for the rest of the night and everyone obliged. There was something missing for me though, the songs seemed as good as ever but it was hard to enjoy. In the end, much as it pains me to say it, I cut my losses and gave my body that well-needed rest before the final day of SXSW commenced.