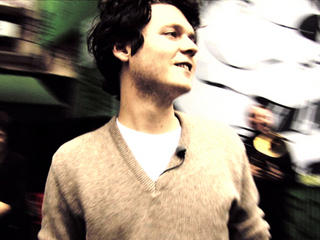 “Chryde, this is Zach from beirut. I was extremely excited to hear of the possibility to fly out to paris to play a show…but alas, the timing is off. on may 31st I’ll be in the midst of preparing a tour with a live band around the east coast….But I was hoping that you keep me in mind, and if I were to go out to europe later this year, Some extra help in paris would be ideal…Its been about a year since I was last there. probably my favorite place in all western europe.”

This was april 2006. Gulag Orkestar had just been released. I can’t remember exactly why, but I had written Zach Condon ; I wanted him to play in Paris. We had two conversations via email, and then nothing. Six months later, I met him for the first time. we spoke of doing a Take Away Show. He looked dizzy ; discombobulated… We spoke but for a few seconds, enough time for him to explain his exhaustion : The day after, he canceled his European tour. We had been so optimistic we had already printed out flyers for the event. He dissapeared, But it was only a matter of time… Forty Take Away Shows later, it finally appears. Beirut : number 64.

Two fantastic previews from the The Flying Club Cup – “Nantes” and “The Penalty” with the best to come. Zach likes the idea of the Takeaway Shows so much, the Blogothéque boys are currently in New York with Beirut filming a video for each of the 13 songs on the album.