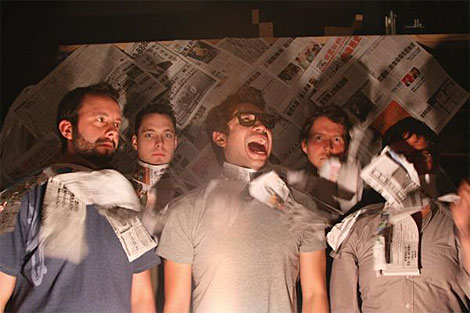 I’ve been listening to Takka Takka’s new album Migration sporadically lately. It’s slowly getting under my skin. It’s the Brooklyn band’s second LP and it was produced by the drummer of Clap Your Hands Say Yeah, Sean Greenhalgh. For those impressed by indie guest appearances, the album also features Bryan Devendorf of The National (which is fitting as the bands certainly occupy the same atmosphere), Lee Sargent of CYHSY, Olga Bell of Bell, and Charles Burst. Their sound is one of brooding rock thematics, electronic soundscapes and torch-burning acoustics. It’s a dense album to get into which is why it has taken me so long to get around to mentioning it here.

Gabe Levine of Takka Takka says the album was born out of his mother’s decision to become a Pamanku, a Balinese holy person and the title refers to “not going back and staying in the place you don’t belong”. There’s a buzz building about these guys in New York at the moment according to Kara from State and they are playing CMJ too.