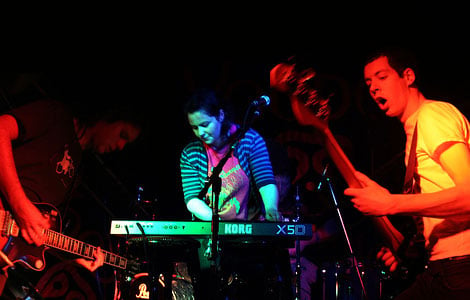 On Gav’s recommendation, We went along to Crawdaddy last night to see Terrordactyl who he had been raving about for the last few weeks. The band were supporting Cork band Rest and were just starting as we got there. What followed was a tremendous swell of beautiful post-rock/math-rock noise which sent shivers down my spine.

The band were amazingly tight for the jagged swooping movements that the songs have. Mick, the drummer brings the sharp rhythms, Owensie on guitar, Jill on the Korg adds a extra layer of musical distinction and Lar who displays amazing dexterity on the bass. It was hard to look in any other direction other than at Lar – his bass technique being one of a man who is trying to hurt his bass guitar to make it play the way he wants, as he writhes around the stage inches away from banging his head off a speaker stack or hitting his bass off Jill’s Korg. I don’t think I’ve ever seen anyone play the bass quite like it.

Musically, it’s frenetic as fuck but it’s the kind of organised chaos that has the capacity to blow you away. Especially when they employ the use of a sudden, massive bass-heavy synth sound (appropriately called “Hell” the band tell us later) that I’m sure is every conservative sound engineer’s worst nightmare.

The band don’t have any releases as yet, there are two songs on their Myspace but they have a split 7″ with We are Knives coming soon. It’s going to be hard to do the band justice on studio recordings, so I urge you to GO SEE THEM LIVE. Again, GO SEE THEM LIVE. The only gigs they’ve lined up at the moment are a show in my old college – IADT and on the 16th March in the Boom Boom Room. Here’s an MP3 for your delectation and there’s another tune on their their Myspace called “Stingray”.

Photos used in image are courtesy of Moose or Cian