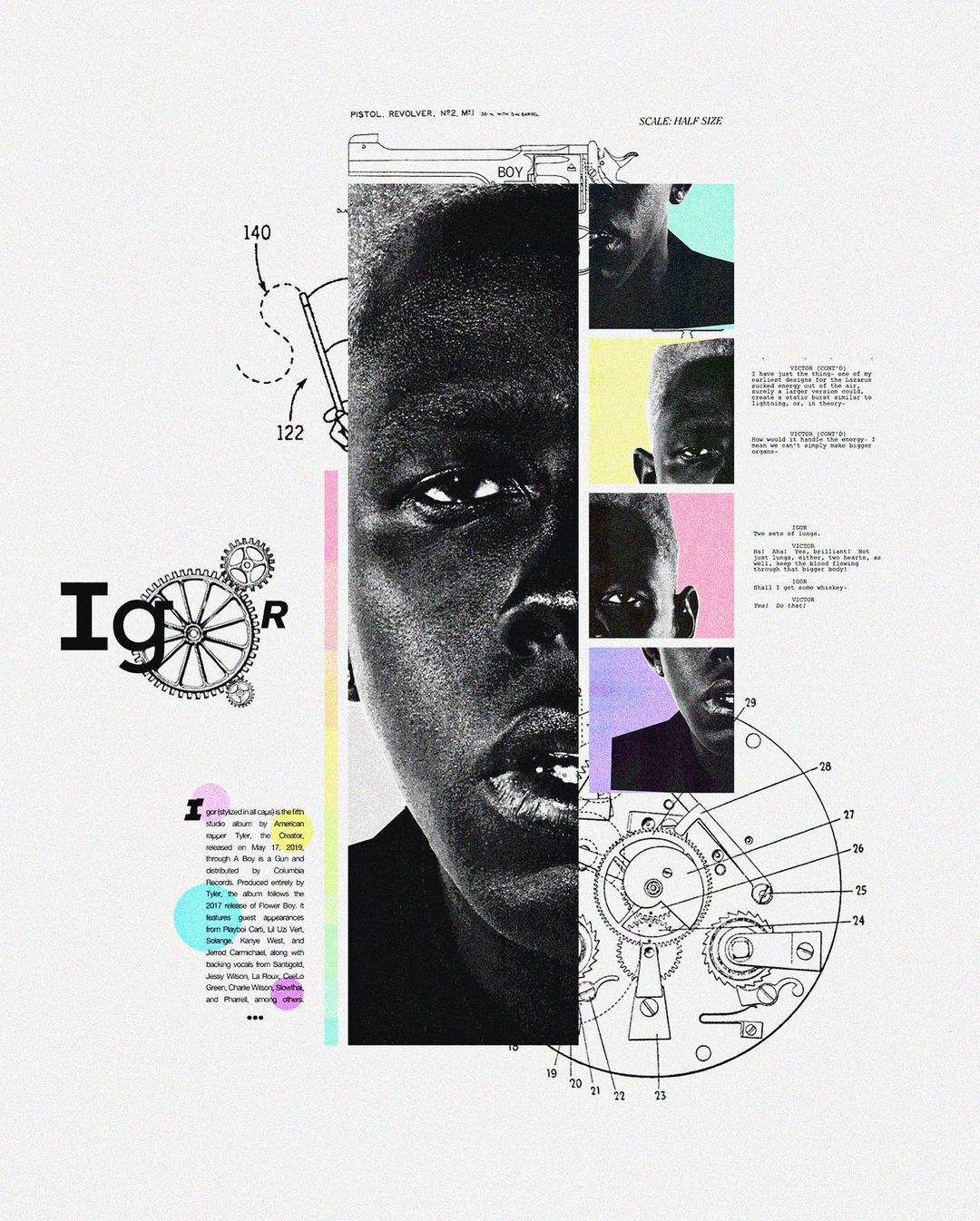 Aaron Fahy is a graphic designer and videographer based in Waterford. He has a degree in Visual Communication and Media/Multimedia from Cork Institute of Technology, and currently works as a self-employed graphic designer. Aaron has worked with recording artists such as Ty Dolla $ign, Orla Gartland, Awkward Z, Pat Lagoon and HappyAlone among others.

Lil Nas X is a fan of yours and occasionally comments on your artwork. As a humble graphic designer from Waterford, does recognition of that scale breed feelings more of contentment or motivation for you?

I have to say that initially I found it so hard to believe that someone of Lil Nas X’s stature was commenting on my work, it felt very surreal. I was sitting at home in my parent’s house in Waterford and one of the biggest popstars in the world was sharing and commenting on my work. I found it incredibly hard to believe. It’s a great buzz to get that sort of recognition. My friends and family would joke when ‘Old Town Road’ came on the radio saying “Oh there’s your friend there”.

All of this being said, I can’t let things like that go to my head. I continue to work harder and focus on my work. I get more of a buzz from working with someone local like Alex Gough, it’s so cool to work with someone up the road and seeing them succeed first hand.

What is a brilliant Irish album artwork you admire?

There are so many Irish album/single artworks that I love. I think overall my favourite artwork is Dermot Kennedy’s Without Fear album art. The collage style is incredible. It’s done by one of my favourite designers Charlie Drinkwater. He’s worked with Dermot before and the likes of Fontaines D.C I highly recommend checking out his work!

You once said that if it weren’t for illegally downloaded music, you probably wouldn’t be doing what you are today. Why is that?

That’s a brilliant question and probably something I shouldn’t have done but here we are now. So essentially we got a huge iTunes library from my aunt that was just full of illegal songs and a lot of them didn’t have proper names or artworks and that’s when I decided to try and make some of my own. I thought it was so cool to have these artworks that I made on my iPod classic, like “I made that and now it’s on my iPod.” It’s definitely something that helped kick off my passion for what I do.

Funnily enough about 7 or 8 years ago, Orla Gartland had a cover of ‘Wannabe‘ by Spice Girls on YouTube that I loved so I downloaded it and made my own artwork for it and now I’m working with Orla for the past three years. It’s mad how these things happen.

Which Irish artist would you like to collaborate with that you haven’t worked with before now?

There are several Irish artists that I’d love to work with. I think the main person I’d love to work with is Kojaque. I’m a big fan of his work and would love to make something for him. I have some ideas already made that I’ll hopefully get to show him someday. Either way, I’m super excited to see what he’s bringing out next.

You’ve been a self-employed graphic designer for years now. What piece of advice would you have for young artists looking to do the same, but who struggle to value themselves and their art appropriately?

Another really good question. I’ve gotten this question a lot before and it’s one I sometimes struggle to answer. I rarely talk about behind the scenes online so what I’m doing might seem like everything is golden and there’s no problems. Unfortunately that’s not the case. Working for yourself definitely seems like the dream and to a certain extent it definitely is, but I think it’s important to be aware of the problems that can arise too!

I think for people hoping to do the same, a piece of advice I’d give is not to rush into it, take your time, maybe pick up work in a coffee shop or something to have some passive income and work on your craft in your free time. Keep posting your art or whatever it is you make online, tag people and use hashtags, don’t let people tell you that you’re using too many hashtags, they’re there to be used. Talk to other creatives, drop them a message, we’re all pretty nice and love to help because a lot of us know where you’re coming from.

Lastly don’t be disheartened if it looks like things aren’t working out, all it takes is one post or the right person to see your work and everything can change.

Secondly, Jacob Burrill. Another Irish artist that deserves way more hype. He has such a distinguishable style that I’m very jealous of. His designs pop out of the page every time I see them, very bold colours and clean line work. I highly recommend checking both of them out.

You are perhaps best known for your series CRAYON COVERS that reimagines classic hip-hop album covers. As an artist who relies on Photoshop and After Effects quite heavily, what compelled you to strip it all back and rely on crayons?

So this is a funny one really. I’d love to have a real inspiring story behind the crayon drawings but essentially the idea came to me one night when I was in bed and I was completely burnt out from commission work that I had just finished and I was thinking to myself how easy this art stuff was as a kid… and it kind of hit me then – “Why don’t I merge those things together?” So the next day I went to town, bought crayons, paper and stickers and started drawing. It started as a joke but it gained serious traction and was shared by various outlets like XXL which was mind blowing to me but on the flipside it kind of annoyed me as the art that I put virtually no work into got the most recognition. Nowadays I look back on it and kind of just laugh at it all.

That’s a hard one, I think the work I’m most proud of is a video I did for Orla Gartland. It was a motion graphic video I made for her acoustic version of I Go Crazy.I think it’s the one I’m most proud of because it means the most to me. I went from being a fan to actually meeting and working with Orla and I found it so bizarre at the time how things like that work out. I put everything into that video and I forced myself to learn new techniques and I’m forever grateful to Orla for giving me that shot in the first place!

Aside from graphic design and videographing, what is something creative you see yourself doing in the future that you haven’t tried yet?

I really want to try my hand at music production. I love music and art, they are by far my two favourite things on the planet and I don’t know what I’d do without both. I haven’t a clue about music theory but it’s something I think I might be good at. Who knows, I might be designing my own artwork sometime in the near future.

Currently I have Alex Gough in heavy rotation. He recently released a project called Bonus Features (Live at the Clinic). It’s a mixtape of live recordings of some of his tracks in the studio. The album was also released with a documentary and it’s a very captivating watch, I thoroughly enjoyed it. It’s so interesting to see the process behind the scenes and you appreciate the project even more knowing the work that went into it.

Podcast: An introduction to Italo Disco