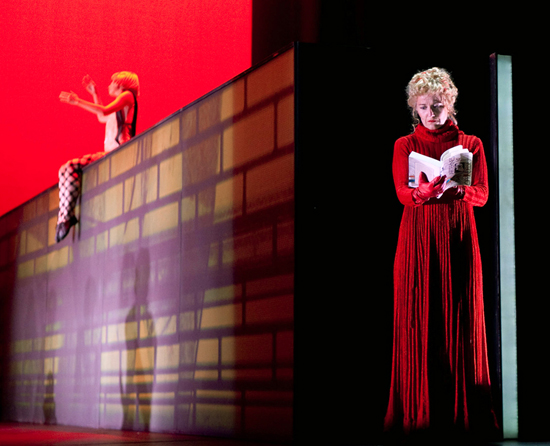 In attempting to gather my thoughts into a coherent piece after experiencing Tomorrow In A Year, The Knife-soundtracked Charles Darwin opera which was performed in the Cork Opera House over the weekend, I must dispense an obvious caveat straight away: I know almost nothing about opera. It may be a centuries old artform but I can probably confidently tell you more about the Opera browser.

Of course I knew what to roughly expect but Tomorrow In A Year, is not a traditional opera as director Ralf Richardt Strøbect told Alan Reilly a week before the Cork shows: “I don’t think that anyone seeing this will run and buy subscription for the Rigoletto… The whole point of this opera is actually to see if you can re-actualise opera as a form, not to make a gateway to the traditional opera.”

Well if that’s the whole point of Tomorrow In A Year then that wasn’t a show I could easily grasp, being unfamiliar with the form. I would imagine like most of the people who attended the Cork Mid Summer shows over the weekend or at past performances in London, Copenhagen, Athens and Melbourne , I was approaching the show from being a fan of The Knife who provided the score of the opera in collaboration with Planningtorock and Mt. Sims.

The recorded soundtrack album of the same name has its own back story (much of it here & here) which includes Olof Dreijer making field recordings in the Amazon. Taken out of context away from the Hotel Pro Forma’s performance of the opera, it is a difficult listen. But it had spawned one of my favourite pieces of music in the last few years – ‘Colouring Of Pigeons’. In-between there’s a lot of harsh, ambient electronics mirroring the variation or evolution of life as Darwin outlined in On the Origin of the Species.

The Knife – Colouring of Pigeons

Tomorrow In A Year, the opera, as it was intended to be experienced, follows a similar journey. The first half of the show is what many would politely call ‘challenging’. We are introduced to characters, well maybe characters is too strong a word. We are introduced to abstractions in human form. There is a mezzo-soprano dressed in red who serves as a sort of mother earth figure, there’s Darwin (a singer) and an actress/singer. As a harsh pre-recorded mix of digital synthesizers, pulses and field recording clatter around the room, six dancers representing cells and organisms jerkily provide interpretive movements perhaps representing early evolution. Occasionally, there’s a pudgy guy (who looks like Steve Carrell’s character in Despicable Me) running around with a surfboard and sneaking around the set like some kind of ungraceful shell-suited cat burglar.

Meanwhile, the impressively voiced mezzo-soprano gets to sing some unsentimental and scientific Darwin diary entries (the libretto) including sexy pickup lines like “white sand made up of shells upon which rests carious rock, then prismatic feldspar between these and former ones, hard white rock with yellow spots.” There are easier ways to communicate Darwin’s theories, it’d be fair to say. Surely, some of his theories were more suited to visual accompaniment than such cold prose?

The interpretive dancing gets progressively better incorporating shadow play behind screens, ballet, body popping and less rigid forms, while green lasers conjure up Darwin’s drawings from his book and visuals provide the backdrop. It’s like evolution you see? The only human emotion dealt with is grief and comes during ‘Annie’s Box’ – a lament for the death of Darwin’s daughter. About half-way through the show, the set pulls back and ‘Colouring The Pigeons’ gloriously fills the speakers signifying the publication of Darwin’s seminal book. The proceeding 12 minutes of music matched to some focused dance movements, even without Karin Dreijer Andersson’s unique timbre pretty much justified the entire Tomorrow In A Year experience for me.

Colouring The Pigeons’ is the start of the latter 40 minutes of the opera which is distinctly easier to swallow than the first half. There are more green lasers, dry ice, less meandering interpretive dance and a pretty effective light show. The music becomes less abrasive as the narrative clumsily hurls towards modern times, with the glitchy techno of ‘Seeds’ and the closest the opera comes to The Knife’s music as we know it, ‘The Height Of Summer’ (the surfboard makes a WTF? return to accompany it though).

I found Tomorrow In A Year to be a simultaneously stimulating and sporadically frustrating experience. The narrative consisted of elements of Darwin’s life that were hard to follow and piece together so movements or isolated parts may be more of an apt description than narrative. That these four distinct parts were only explained in a leaflet handed to me before the show tells you how easy it was to pick up meaning. As a result, the incoherent narrative with some meandering choreography in the first half were a slog. When the music of The Knife soared so did the opera itself. If you’re you’re only familiar with The Knife, it’s best to treat the overall experience as a visual accompaniment, more of a moving painting for the musical soundtrack than an operatic examination of Darwin’s life and theories.

Photo via The Quietus and Lucy Johnson.

The Knife – The Height of Summer by Rabid Records