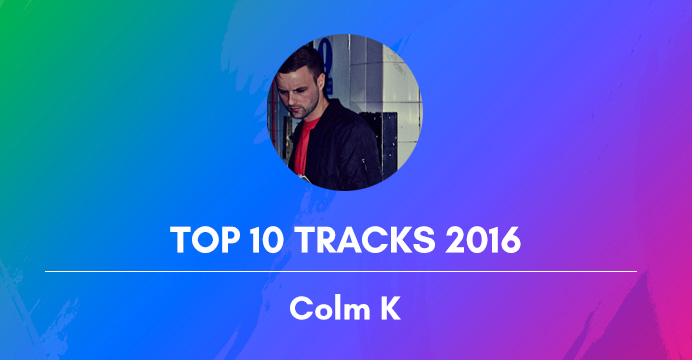 Colm K is a Cork DJ and producer who is among our best. He has a love of soul, house and jazz music, he’s a former RBMA attendee, a regular at Sunday Times parties in Cork and monthly radio shows on NTS. Here’s his latest release.

is known for his considered sets of soul and house music as well as his own electronic productions. A former RBMA attendee, Kenefick is working away on new music for next year and DJ-wise, you can find him at residencies at Sunday TImes and So What! in Gulpd Cafe, Cork. Here are his tunes of the year.

This one is a recent addition and what an addition it is. Big Crown released some nice music in 2016. The Lady Wray LP is well worth a listen. I’ve no idea who 79point5 are but one thing I do know is The Disco Dub on this 45 won’t leave my record bag anytime soon.

Shouts to Alex But for hooking me up with this one earlier in the year. I’ve fond memories of playing ‘Follow Me’ to a very reception audience in the forest at The Electric Picnic this year. A simple, excellently produced broken style groove is embellished with Spacek’s catchy hook. “Follow me… Follow me… Follow me…”.

Spacey, soulful, instrumental House music. Some of its straight uptempo and some a little slower but all of it bumps. This one rarely left the bag this year.

Frank’s sophomore effort lived up to all of the hype!! A much deeper release than Channel Orange, Blonde didn’t leave my earbuds for some time this Summer.

I’m enjoying the current resurgence in African boogie and soul music thats happening. Labels like Soundway and Voodoo Funk are consistently re-issuing great pieces (that are impossible to find in their original form) and Afro7 are new to the table. Nyniukia is amazing, it promises to lift any room. I’m looking forward to playing this at our next Sunday Times! party.

Deep, broken, soulful, house music on the excellent Mod Hut record label. A record that brings you in and doesn’t let go.

This came as part of a CD that Sound Signature released as ‘Songs That Should’ve Been Out On Wax By Now – Part One’. The CD came with no artist names and I’ve just learned (thanks Discogs) that it’s Alton Miller on production. I’ve great memories of playing this at Body & Soul festival this year. Sunday Times closed out Earthship stage on the Sunday amidst a heavy downpour of rain. This was one of the tunes of the night.

Fruit – If You Feel It, say Yeah

Athens Of The North were on point again with this. I was initially disappointed to see this one getting the re-issue treatment. I have the original 45 on Cypress and cherished it. However, I think he got the original tapes and recut the record. I heard Theo Parrish rock this one recently and it sounded incredible! The outro where the piano comes in with the bass and drums is heavenly.
https://www.youtube.com/watch?v=j05iw4u_wJM

A Tribe Called Quest – We The People

Another one that came later in the year but well worth the wait. To be honest, it was exciting to be excited about a Tribe record again. Besides all the chat about it being more of a Q-Tip record, it being slightly over produced, and the absence of Ali from the recordings. We Got It From Here, is a solid album. It’s remained on heavy rotation since I first listened. RIP Phife.

Shouts to Sev for putting together a solid collection of new music. The iCed track, Forever, on here is incredible. Oh.. wait there’s a great track from a certain Cork man on here too 😉