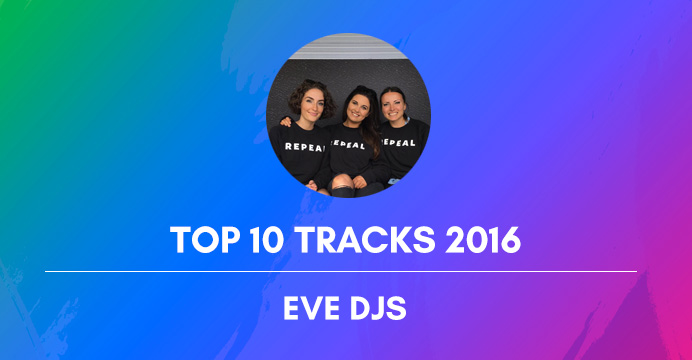 Eve are a Dublin-based female DJ collective host all-female parties of electronic music in the city, increasing the presence of women in an all too male-dominated scene. Lauren, Micu and Jessica Eve are three Dublin DJs who are throwing good parties under the Eve name and they picked three tunes each and one all together to make their top ten of the year.

A track that every time I play it, it gives me goosebumps! The story behind it is pretty magical too. (Lauren)

As Mitzi once said “there’s an interesting bang off it” haha! I don’t think there’s a better description! Really like this one. (Lauren)

This really has been the year of Enzo Siragusa, I’ve been obsessed since 2014 – this tune is the perfect example of why. ( Lauren)

Released on Endless, the most magical track, full of warmth.. exotic atmosphere… incredible deep energy. I fell in love with it instantly. (Micu)

Absolutely banging, a haunting vocal track released on Secret Weapons 8! Every time I play it, it evokes the same dark, strong surge of energy through me!!! (Micu)

I first heard it played at Panorama Bar back in May, played by Mano le Tough. It made a lasting effect on my heart and soul, absolutely unforgettable.. every time I play it I forget myself for a while… not many tracks have the same effect on me.. 🙂 (Micu)

This track!! Just everything, the beginning, the middle, the end – it’s the ultimate groove. The vocal is brilliant so every time I play it, I end up shouting along cos it’s soon good. (Jessica Eve)

This gets played in a lot of my sets and it always goes down really well, I love the rawness of the track and the kick drum is sick! (Jessica Eve)

The breakdown in this track creates such a beautiful tension in the room, that’s all that really needs to be said for this track. Just listen to it. (Jessica Eve)

So many beautiful Mano le Tough tracks but this has to be one of the favourites – it’s featured in our Hidden Agenda mix, the melody in this evokes such an emotion every time we play it – it’s haunting almost but is still banging! (selected by All 3)

London Grammar return with ‘Rooting For You’