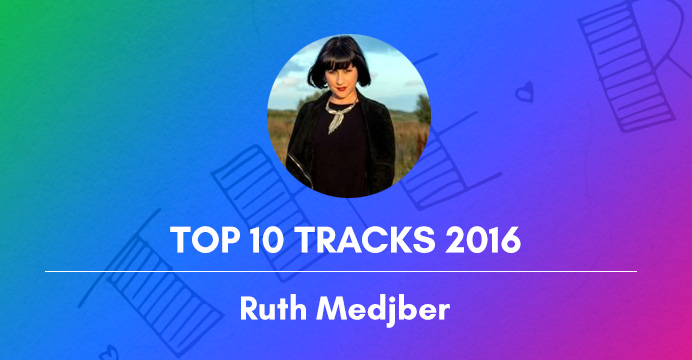 Ruth Medjber is a freelance music photographer who as well as covered every festival going also was behind Women Of Notes project (with fellow guest selector Louise Bruton) highlighting the awesome women in music. Read my interview with her in the Irish Times.

Listen to the top 10 on Spotify

I’ve been banging on about these amazing women for so long but I think the whole world listened in 2016. I heard this tune for the first time when they played it live in the Unitarian Church. Needless to say I bawled. You’re a total robot if you don’t at least whimper. Also, bonus points to any bands who mention photographs. It’s a secret soft spot of mine.

Some people just don’t get Meltybrains? and I think for a long time it’s because what they did live on stage was never fully realized their recordings…until The Vine! It’s a very fun, creative song that’s a tad bonkers. It showcases them as great musicians but also very unique. My advice is check them out live at your earliest convenience, but leave any expectations behind and just go with it.

I got treated to an advance copy of Daithi’s forthcoming EP (Out March 2017) and really wanted to include it on my list. Falling For You is the first track to be released from it and the others are complete bangers too. The fact that it includes Sinead White’s super strong vocals was a total bonus. She can really sing this live too, no funny auto-tuning business going on here.

Zammuto – It Can Feel So Good

Listen, I have no clue about this artist. Apparently they’re American. This is just one of many randomers that Spotify chucks at me. It’s quite funky. It’s got some little computer generated vibes that could easily just be made by a dude in his bedroom, who knows.

Talos – Your Love Is An Island

It was Brendan Canty’s video that brought me to this tune. I think the combination of great visuals can really enhance the pleasure of listening to a song for the first time. I came late to the Talos game, only seeing them at HWCH’s for the first time in October. I’m a fully fledged fan club member now obviously.

The Regrettes – A Living Human Girl

I’m very aware that this song doesn’t quite fit into the over playlist. However, I’m including it as 2016 featured a lot of incredible, empowered, driven women and I think 2017 is really going to drop the Feminism bomb all over the place. So this pretty little ditty is a fun poke at all the complete nonsense that women have to put up with.

He’s a Berlin based composer who is published by Erased Tapes, which probably instantly says a lot. My reason for picking this particular song is that it’s 8:38 minutes long. During that time I never take my mind of the track for a second. It holds you from beginning to the end and goes proper nuts in the middle. Quite an achievement with my goldfish attention span.

Scroobius Pip, Didier Kisala- Who Are You?

Spotify threw this at me and it stopped me in my tracks. It was my first introduction to Congolese singer, Didier Kisala. I’ve always had a soft spot for songs in different languages anyway but then when Scroobius brought in his lyrics my heart melted. It’s a song written from the perspective of a refugee entering the UK for asylum. A tough journey which gets even tougher. It’s taken from A Long Road : A Record About Refugees (featuring Tinariwen, Scroobius Pip, Robert Plant and more) which is a concept album that hopes to highlight the plight of refugees. Let’s have more of this from our musicians in 2017 please.

A Norwegian duo. That’s about all the info I have on these guys. Very beautiful, soft, folk-like vocals over some nice electronic beats, a bit Douglas Dare-y. It’s just a pretty sounding and simple track.

She’s Danish… I think. This particular song sounds like it could have been performed down at Another Love Story or as part of a magical night spent in the Unitarian Church with candles and mulled wine where you lose yourself in the music and have a little bonding experience with the rest of the crowd. I’ve no clue what she’s saying and I quite like it that way.