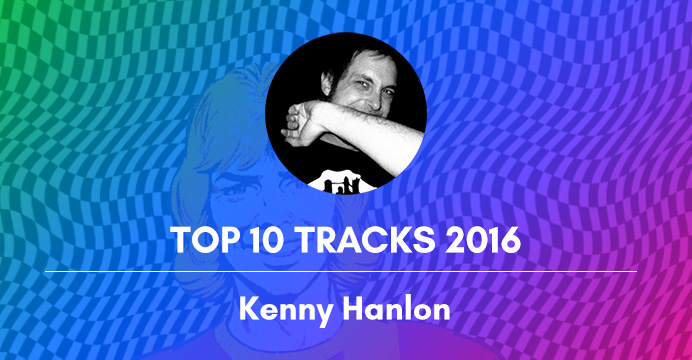 Kenny Hanlon is a DJ and the boss of Apartment Records. The label returns in 2017 and releases are now on Bandcamp too. Catch Kenny DJing in Cork on Saturday.

Oh lordy. What a record. Glenn Crocker has been in the game nearly 25 years and yet here he is producing the undoubted record of the year, showing no signs of letting up. There is so much funk on display here that it needs its 9 minute plus running time to let it alllll hang out, from the rolling drums, the horn samples and that flute solo along with everything else he piles into the mix, you’ll be dabbing yer brow with yer handkerchief after 30 seconds and it’ll be soaked to the bone by the end. Oh lordy.

Roy Of The Ravers – Emotinium

Nitpickers can come at me, yes this track first appeared in 2015 on a limited edition tape, but its long-awaited vinyl release only surfaced this year. This is a quintessentially British acid record, following in the footsteps of the likes of AFX and Ceephax Acid Crew. Like a love lorn ode to a really strong gary someone took in 1995 that made them feel like they would never EVER come down, you too can feel just like that for 11 minutes and 45 seconds, or longer if you inevitably put it on again straight away after.

Coming on like some sort of demented voodoo ritual techno, Melly’s calling shot on his debut release sounded like nothing else in 2016. Driven by drums that make you feel like running into a wall head-first just for the fun of it, its warped vocals, piercing 2 note melody and drone-y bass-line is all the record needs to create a wonderfully intense feeling like you’re getting so excited about something that you might soil your pants but couldn’t care less about the outcome.

Truth be told if you do follow Melly’s Skip Fire with this song you may just follow through in glorious fashion. Another song that flew in the face of 2016 techno’s penchant for navel-gazing, grey-scale tedium this song revels in its unhinged everything and it’s driving melodies are, alternatively, rather lush but also a little bit bonkers. Don’t expect to hear Ben Klock play it any time soon.

Keeping up the loose theme of songs-to-make-you-wig-out-to is Dutch electro maestro Dj Overdose’s contribution to the excellent Belfast label Computer Controlled. A combination of Chicago ghetto house, electro and Total Rave Acid, it builds up such a head of steam that it can’t do anything but breakdown half way through, before re-appearing with some MASSIVE SKYSCRAPING SYNTHS that no one saw coming. Note: The vocal sample might drive you a bit round the bend by the end.

Nebraska – Look What You’ve Done To Me

Time for something just a little bit more on the subtle side of things, there has been a load of folk from down under and Canada getting showered in praise for their languid deep house stylings yet none of those chancers came close to matching the grace and beauty of Look What You’ve Done To Me. Its horn samples may have been slightly surpassed by Underground’s Contact (Nova) but no other vocal sample in 2016 reduced men, women and child of all shapes, colours, sizes and creeds to such simpering, blubbering messes. Group hugs all around on this one.

The Wino Boys or Wah Wah Wino or whatever they are calling themselves this week are a trio of Dublin lads who have developed a knack for making sometimes wondrous electronic music and sometimes kinda shite electronic music. But boy when they get it right does it hit. Chartered is a sumptuous and elegant piece of deep house you could imagine Floating Points playing if he wasn’t too busy trading rare afrobeat jazz or whateverthefuck records with Giles Peterson for an Actual Fucking Car like a massively pretentious wanker.

Ok, I may have to take back Asusu’s award from earlier because this retro-tastic pean to 90s German trance managed to set dancefloors alight with both the original version and its beatless take. 2016 has seen a really boring love of irony shine through in a lot of dance music, people too busy making knowing winks with their output and branding, as if they are too fucking smart to make genuine, emotional music and have it stand on its own merits. Mutter was a shameless – if unintentional – riposte to all of that. It wasn’t trying to deconstruct or mock trance, that most easily of maligned genres, instead it embraced it wholeheartedly. And for that, I’m giving it a nod.

Keep those hands in the air for the final pick(s), a double whammy from Chinaski’s Rivers Edge 12″ on Uncanny Valley. Disaster was probably the track I played the most in my dj sets this year, another song that wears its trance influences boldly on its sleeve, combining them with some spooky John Carpenter influences. Lifetime also made strong nods to 80s horror / sci-fi soundtracks, an epic beatless number until it finally allows its drums to come crashing in at the very end, then finishing just as soon as it really starts. It was also my favourite song to play air drums to in 2016.