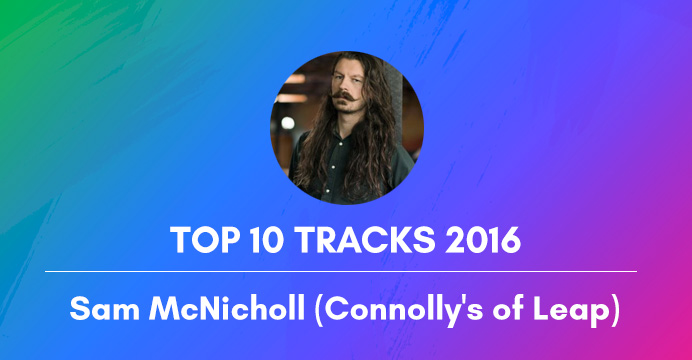 Sam McNicholl is the the proprietor of Connolly’s Of Leap, one of the best little venues in the country. Sam also plays drums with Talos and is a top dude. I interviewed Sam about his venue last year and it’s currently celebrating a year being open.

The highlight of my year in 2016 was being with Justin and his crew when they released this record into the world at the Michelberger Hotel in Berlin. 2016 has been one of the best years of my life and this song will always bring me back to 2016 for years to come. This was the year that everything fell into place…

James and his band came down to my house in June to rehearse the album before the world tour. Hearing one of my favourite bands literally rehearsing in my house!! A JOKE!! Rising Water was the first single on the record and will forever hold a special place in my heart.

Christine & The Queens – iT

The first time I heard this song I had to pull the car over and listen to it on repeat, the truth of the lyrics completely blew me away. It’s minimal, it sounds great and deals with gender fluidity. 2016 in a song for me.

This record took up a lot of my time this year. It’s been cathartic. This record has healed me and put me back together when I really needed music to do just that. It really reminds me of two of my favourite things from 2016; Peter Hayes and Iceland.

Talos – Your Love is an island

This really has been to the soundtrack to my year, playing music with my best friends all over the country has been unforgettable. Eoin French in my eyes is a seriously talented and hardworking individual and although i am IN THE BAND i am still a huge huge fan, it feels really good to say that actually.

Matt is a friend of mine from way back when i lived in Australia and 2016 has been good to him! It saw him release a fantastic by the name of ‘Telluric’. My mate Alex Hendrix co produced. Seeing Matt do his thing to a Sold out Olympia was truly heart melting – 2017 will see him back in Ireland, mark my words.

Having so many musicans come through my house one of the BEST things is that I get a constant supply of new tunes. The boys from Moxie put me onto this new Vulfpeck record and I have played it to death – its pop perfection punctuated with some serious serious musical chops! In my humble bullshit opinion, Vulfpeck owned the internet this year.

No list is complete without a love song is it? Like an idiot I gone done fell in love with a genius this year. 2016 will forever be know as ‘The year of the Queen of Mullingar’ .

In January I had Jófríður Ákadóttir from Iceland come and stay with me. We did a really nice piece for Totally Dublin. She is a gift from god and is one of the most honest and special people I have yet to cross paths with.

Bon Iver/Francis and the Lights – Friends

THIS is my tune of the year. It’s been a fucked up year on a world scale but honestly it has been the best year of my life. I have worked my little ass off all in the name of art and it’s working. This song makes me smile, this song makes me dance and that is my answer the the never ending tidal wave of shit that the ‘Real world’ throws at me/us. See you on the dance floor in 2017! LOVE TO ALL!