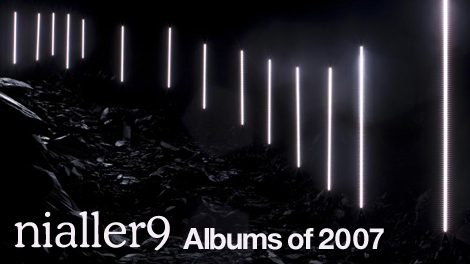 My subjective offering of albums I utterly loved this year. Ooh, and please don’t tell me In Rainbows and Kala should be higher, just post yours in the comments instead. Oh, and Happy Christmas!

Leslie Feist’s 2004 album Let it Die allowed many who were enamoured by her recorded and live performances with Broken Social Scene to indulge some more time with her distinctive voice. With this year’s The Reminder, Feist stepped out into the limelight on her own with an album as accomplished, adept and edifying as any BSS record. Naysayers saw her as easily marketable, notions suffused by the eminently catchy “1234”, a choreographed video and the songs usage in an iPod ad but such accusations belied the strength and quality of the album and its superior singer.
MP3:

Feist – I Feel it All

Personally, Monch gets my vote for hip hop return of the year. His Tripod gig in July replenished my dwindling respect for hip hop artists in the live arena. Desire comes 8 years after his debut; a lifetime in hip hop terms but a less than transitory period between albums due to legal problems meant Monch had to look for other ways to pay the bills – most noticeably writing lyrics for dunce-cap rap mogul P Diddy. Desire largely supplants the sample-based process of Infernal Affairs for a duality of live instruments and soul samples. He dabbles at playing a Black Elvis (“Body Baby”), covers Public Enemy admirably, talks freedom and personal will with eloquence, intelligence and wordplay witticisms Diddy would give his left testicle for.

A marked difference to Dear’s previous work under his own name, Audion and False – Asa Breed saw Dear extending his oeuvre with more accessible, lyric-driven electronic pop closer in ethos to Hot Chip than Richie Hawtin. The result is an atypical example of an artist who understands dance cadences and what makes good textured pop. Nevermind that the album also includes acoustic-based compositions and the epic melancholic atmosphere of “Deserter” which placed in my songs of the year.

Bursting straight in with the polychrome psychedelia of “Melody Day”, Ontario native Dan Snaith’s fourth album proper outshines the previous three with its memorable robotic drums alone. This is “an album” in the traditional sense, 9 songs of beautifully crafted melodious vaporous pop. Strings, flutes, electronics also dominate and in the process, Snaith dispenses with filler and noodly bits.
MP3:

There is no way this should have been as good as it turned out to be. Zach Condon’s Balkan project turned to Parisian streets for inspiration, transforming his solo project into Beirut the ensemble band while he was at it and still sounded more musically gifted than those many years his senior. The album is effortlessly brimming with superb arrangements adorned with piano, ukelele, accordion, brass, percussion while Condon’s sweet croon (inspired by Jaques Brel) makes it sound so easy. The bastard.

Beirut – The Penalty (with Owen Pallet)

This side of the Atlantic certainly arrived late to this Canadian’s hip hop party (the album was only released in October, a full 18 months after our North American cousins) but not too late that we didn’t find Rollie Pemberton’s brand of electro hip hop as something very compelling indeed. The songs are simple but spacious, the synths are pummeling and Rollie’s flow is commanding. We may have been tardy to the party but we’ll be first in line when his new album After Party Babies is released in March.

As much as James Murphy deprecates himself as an ageing, chubby producer with a great record collection, there’s no denying that Sound of Silver is the anything-but-fortuitous pinnacle of the same man’s musical career. Steeped in a history of dance and rock culture and rich in propulsive instrumentation, Murphy streamlines the self-titled debut’s jagged edges. Despite also claiming to have made up lyrics on the day of recording, he manages to conjure up his own humanity in two of the most evocative songs of the year (“Someone Great” and “All my Friends”) as the album’s centerpiece.

A solo record by Noah Lennox of indie-darlings Animal Collective who are notorious for their all-out experimental yet thrilling indie babble, Person Pitch just keeps giving and giving. It appeared early in the year and promised us that summer was only around the corner with its blissful sunshine-drenched melodies and playful Brian Wilson-esque sounds. Unfortunately, summer in Ireland was a disastrous rain-soaked climate-changing motherfucker but thank Noah I had this album to listen to while fighting my way through sheets of precipitation and howling wind.

No other band has commanded more posts on this blog since it’s inception in 2005 than Battles so it’s fitting that Mirrored is my album of the year. A galloping, dizzying and highly innovative instrumental album, Mirrored turns man into machines as well as far exceeding the expectations I personally had of the band. Listening to the interplay of four equal musicians on this album, each virtuoso player breaking down conventions of their own instruments and creates something commensurate together. Not to forget it’s also A LOT of fun.

“Atlas” is my song of the decade, nevermind year. John Stanier’s drums kick with such sinew on “Leyendecker” you can hear the drums ringing in your ears. In-between and after, Battles rock with such exhilarating kineticism that by the frenzied climax of “Race:out” you’ll understand the intelligence of their sobriquet.