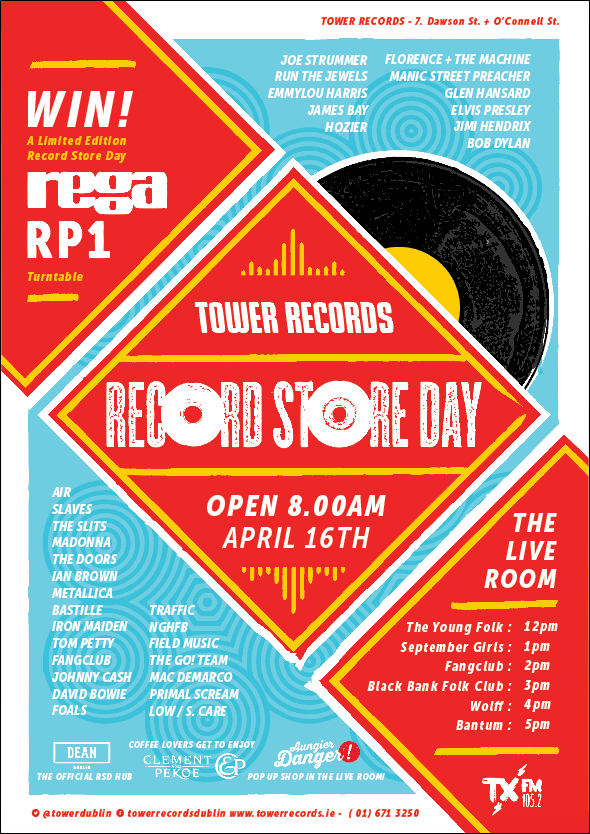 As they do every year, Tower Records Dublin are pulling the finger out for Record Store Day.

They’ve a few things lined up for Saturday.

First is their Vinyl Destination Sale is on now with titles from Kendrick Lamar, Fleetwood Mac, Pj Harvey, Chvrches, The Beatles and more reduced from €8 for ten days.

TXFM are running a comp on air this week giving away vinyl on Claire Beck’s show from 11am to 3pm and Paul McLoone on Today FM, 9pm to Midnight is giving away first access to Tower Dawson Street before anyone else on 9am so you can get first dibs.

On the day in Dawson Street, TXFM will be broadcasting from 7am til 11am. The store opens from 8am and there will be live performances throughout the day from  September Girls, Fangclub, Wolff (AKA Johnny Stewart) , Black Bank Folk,  The Young Folk and Bantum.

Donuts and coffee in-store from Aungier Danger and Clement & Pekoe.

Afterwards, the Tower afterparty hits The Dean Dublin on Harcourt Street for some vinyl DJs from 4pm until 10pm in the lobby bar. Free wristbands in-store during the day which will entitle you to a complimentary Record Store Day cocktail at Dean’s Lobby Bar.