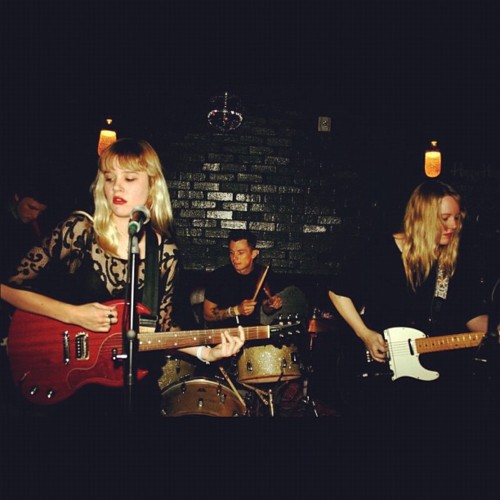 Almost at the home stretch of the top 5 new artists guest posts now. So far we’ve had 14 guest posts with a few more to come this week. The 15th post comes via Veronica Murtagh of the deadly Chicago-based music blog Cream Team. Check out her choices below, then visit her site.

Four-piece Weird Dreams were born from a paisley haze floating somewhere over Dalston and thanks to the always on-point Tough Love Records, drifted their way into my headphones where their handful of singles have firmly sat, refusing to move, for the duration of the fall months. Their psychedelic pop sparkles with feel-good pleasantries on the wings of soaring guitar caught by the occasional gust of wind. Their debut album is slated for release in February, and they’ve just finished a November tour around the UK and Europe supporting Stephen Malkmus and the Jicks.

Skittering drum patterns build to peaks, then crumble, overtaken by immense washes of hazy, ambient bliss. Feelings of agitation are fleeting as you breathe in the purple smoke and exhale bleary-eyed. These are the sounds of Chicago duo Supreme Cuts, and they’re the most exciting new act to come out of the city I call home this year. Watching an act develop from a single rough cut, to their first live show, to confidently playing to a packed and excited crowd at CMJ, really there’s nothing better. It makes you proud. Look out for Supreme Cuts’ debut LP in 2012 and pick up their Trouble EP available via Small Plates Records.

Listening to Doldrums for the first time is a lot like walking into a parked car. There you are, minding your own business, caught up in your thoughts and then SLAM, your knees buckle and you’re startled into a state of sensory overload. The man behind Doldrums is Montreal’s Airick Woodhead, whose boundless energy in the form of whipped samples, clanging percussion and all manner of vocal chaos on his debut EP Empire Sound is enough to cause a seizure. It’s one giant, glorious colorful mess that’s as brave and melodic as it is disheveled.

Sisters Jennifer and Jessica Clavin made a racket as members of Mika Miko before the band disbanded, and thankfully this year we got a little of that punk spirit back in the form of their new project, Bleached. Scuzzy melodies hollered in unison quake against a backdrop of even scuzzier guitar riffs. Live, the band is even better, unleashing fiery blasts of rumbling, roaring rock from underneath swinging blonde manes. Bleached have a few 7″s out, their newest via Suicide Squeeze.

Congrats to Clams Casino, producer of the year. You already know the name, you’ve heard his work for Lil’ B, ASAP Rocky, Washed Out, his Instrumental mixtape, his Rainforest EP (…and so on). The behind the scenes kid from Jersey with the superhuman work ethic didn’t get much sleep this year, turning out inventive hip-hop beats rich with emotion at a relentless pace. But what really stands out about Michael Volpe is the open-mindedness with which he approaches music. He produced Soulja Boy’s “All I Need”, released Rainforest on Tri Angle and played at the MoMA alongside Black Dice, defining what was a melting pot year in music, where genres and conventions finally lost out to creativity.