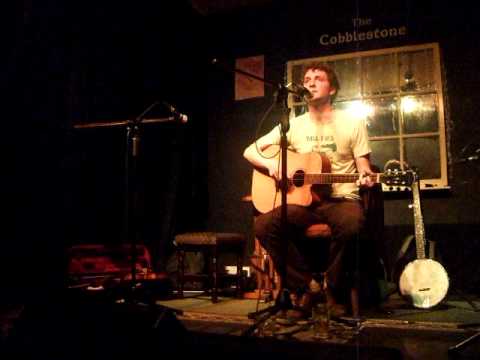 I thought this might have been a good gig and my it was, and then some. You know when you listen to some spectral folk singer and wonder to yourself whether an artist can do it alone or whether its all production. In The Cobblestone’s intimate back room with about 40-50 people or so, Sam Amidon proved not only can he do it alone but he can do it with panache and a captivating personality.

He played Appalachian folk songs, Irish folk songs, wrapped his tunes around others like Tears for Fears ‘Head Over Heels’, R. Kelly (watch the video), screeched like a banshee mid-song startling everyone, did pushups mid-gig, played guitar, fiddle and banjo and told funny stories about his dreams/songs where he drank wine in the woods and floated atop snow dunes, hung out with conceptual artist Paul Simon and had auditory hallucinations where he re-imagined new Thelonious Monk material. He cast out demons in a strange incantation dance on stage, told us the last time he was in Mayo he slept in a football field and was generally awesome. His voice has a brittle, smooth, American twang it’s hard not to like. Brilliant, brilliant gig.

Go see him NEXT WEEK in Cork and on June 1st/2nd with Phosporescent in Dublin/Cork.