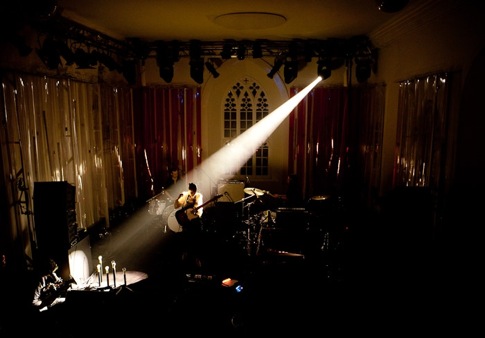 It’s Dingle time. Season 9 of Other Voices in the town of Dingle, Co. Kerry is a music enthusiast’s haven from the world for five days. Thankfully the snow was left behind, but we’ve brought with us a great sense of expectation for what’s to come. And how could we not? The National (who have just arrived), Marina & The Diamonds, Lissie, And So I Watch You From Afar, Everything Everything and the late addition of Steve Mason are just a handful of the acts braving it to the Dingle peninsula for these unique and intimate gigs, and we do mean a “80-people-crammed-into-a-genuine-200-year-old-church” level of intimacy.

Night one’s performances saw Other Voices veteran Richard Hawley invite along some famous friends to play with him. The bad news is that Laura Marling, was struck with flu so was unable to perform. Having travelled on the ferry from the UK and made the long trek to Dingle, it’s a big disappointment especially considering Marling accepted the invitation to perform at the request of a good old fashioned handwritten letter from Hawley.


The night was kicked off in searing fashion with Anna Calvi. The young London-based musician, who will release her debut album on Domino Records in January put in a set that can only be described as fierce. It’s easy to see why she has supporters in high places like Brian Eno, Interpol and Nick Cave; Calvi works her guitar like a theatrical machine, building swathes of dramatic noise on six-strings as she stands straight, hair tied back tight, with pursed red lips, black heels and a “I mean business” white shirt and long trousers. Accompanied by harmonium, extra percussion and a drummer who looks like he might have just walked off the set of Twilight, Calvi’s music is dark, sensual and frantic. It’s easy to see why she’s been compared to film-maker David Lynch. Both thrive on creating surreal worlds with their art. Calvi will be back to play The Workman’s Club, Dublin on February 23rd.

Sheffield-born and bred Hawley has played the series twice before, so this year he approached things differently. A full set of covers from his musical influences took in renditions of Lee Hazlewood’s ‘The Girl On Death Row’, Arthur “Big Boy” Crudup’s ‘I’m Gonna Dig Myself A Hole’ and Elvis’ ‘Devil In Disguise’ (dedicated to the Catholic Church no less). A unique interpretation of The Velvet Underground’s ‘I’m Waiting For The Man’ was prefaced with the idol-shattering tale of a bizarre Lou Reed karate and sword routine at a gig they both played in Norway.

It was then time for Hawley’s special guests to make an appearance. A reticent Lisa Hannigan is anything but in voice when the duo pair up for a sublime ‘Hushabye Mountain’ from the film Chitty Chitty Bang Bang. Lisa is left alone with the band for a goosebumps version of ‘Moon River’ which she informs us, Hawley’s band can do in any key.

Then, it’s the turn of Hawley’s fellow Pulp band member, the inimitable Jarvis. No second name required. Still as recognisable as ever (and seemingly dressed in the same clothes as ever), Jarvis is in a talkative mood. After playing another Lee Hazlewood cut – ‘Pour Man’ and an Everly Brothers song, he goes into full swing. Jarvis introduces us to his guitar which due to its sentimentality was bought a seat on the flight over and thus, received a boarding pass with the name ‘Mr Guitar Cocker’ on it. He talks about seeing Fungi The Dolphin, the setting – St. James Church and compares the relationship between a priest and the congregation to the artist and audience dynamic (“performers have egos and putting them up on an altar just feeds that”), and then free associates from the pulpit, to introduce, yes, a Pulp song – ‘Something Changed’. It’s a salivating precursor to next year’s Pulp reunion.

For a cracking encore, Hawley, Hannigan and Jarvis (on Christmas bells) join forces for a swoonsome version of ‘Silent Night’ which really couldn’t have been topped. As our congregation left the church into the crisp night air, it was clear from the chatter that Hawley had put together a superb night of music. It looks unlikely that Dingle will be able to say no to him in future years.