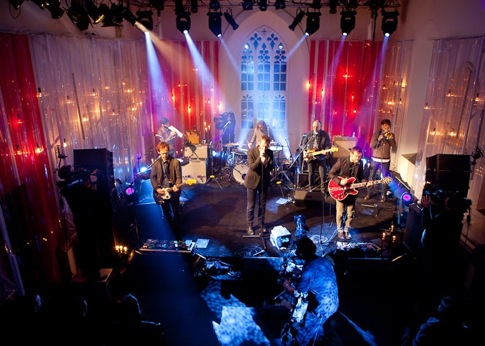 Since arriving in Dingle for the recording of TV show and cosy gigfest Other Voices, the only band that was on everybody’s lips was The National. Their three day pre-Christmas residency in Olympia Theatre in Dublin leading up to this special once-off gig, fueled the expectation further and the prospect of seeing a band who feel like they are at a tipping point in their career in a small, seated space was almost too much for some.

Luckily, eager fans didn’t have to wait long. The National were the first band on-stage due to having the most gear. The band flew in earlier yesterday afternoon and spent the day in Dingle town where they got acquainted with some proper Irish food including bacon and cabbage and brown bread ice cream. The band also recorded a special session in the same house where Elbow and The xx performed in years previous so that will be something to savour when the show airs in the New Year.

The National’s set was 45 minutes of concentrated awesomeness. Their overarching selling point is an intensity that is peerless and unique onto themselves. At eight songs, the setlist reads like a collection of the band’s career highlights. The songs: ‘England’, ‘Fake Empire’, ‘Bloodbuzz Ohio’, ‘Terrible Love’, ‘Runaway’, ‘Mr November’ and ‘Slow Show’ are delivered with an increased ferocity from the start to the finish of the set. This is a band who thrive on presenting a razor-edged sound together, it’s about the big picture and the delivery of a big sound.

Berninger’s on-stage demeanor is well-documented at this point, but my, is it still a voyeuristic thrill to watch. He might be uncomfortable with his position in front of the mic but that doesn’t stop him demonstrating a cartoon-esque barrel roll across the stage floor when he doesn’t know what to say for the cameras. Elsewhere between his baritone vocal delivery, his perplexed stomping of the small stage is jarring and elicits anxiety. He shouts at no-one in particular, as if looking for somewhere to place his insecurities and as uncomfortable as it feels, we can’t take our eyes off him. Details still shine through their united stance – the front twin guitarists of Bryce and Aaron Dessner are a joy to watch while Berninger’s lyrics which flit between sentimental (“You know I dreamed about you for 29 years before I saw you”) and dark (“You’re the voice that’s swallowing my soul, soul, soul”). ‘Afraid Of Everyone’ is a stunning highlight, a culmination of all that aforementioned ferocity, passion, darkness and enormity. It’s almost too much to take so close up if the breathless exhalation from the audience post-set is anything to go by.

An aspect of Other Voices that makes it that little bit special, is the lack of divide between audience and bands. We all mingle in the same pubs before and after; there’s no real backstage or artist area so we get to see the pre-gig nerves and routines. And there were a fair bit of nerves floating around last night.

John Smith had the unenviable position of following The National and he needed a hot whiskey to calm himself before taking the stage. He needn’t have worried too much. On the face of it, Smith is a folk singer-songwriter through and through in the British tradition. Slowly though, over the course of his short set, there’s a realisation that not only is he an uber-talented guitarist with a smoky-voice, but he’s also a pretty singular proposition. He demonstrates this best with his final song where he uses his guitar for melody and percussion together like we’ve never seen. You must see this performance when it hits TV screens. 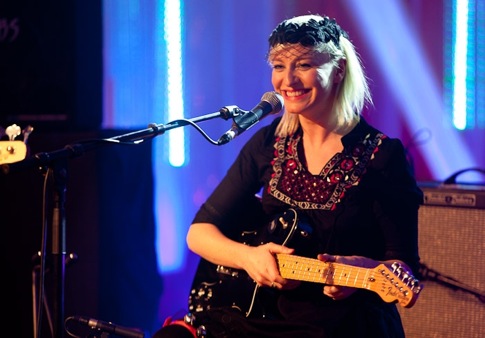 The nerves were a factor again when Cathy Davey took the stage with a new band and a new style – sort of like a Morris Dancer with a fetching hat complete with bells on her right leg as the only percussive instrument. Her set relied on tracks from her latest album The Nameless. Despite some false starts, there were some clear highlights: ‘Bad Weather’ recalls ‘Dream A Little Dream’ in its simple yet strong melody and lyrics (“Bad weather will keep us together if only in a cloudy way”), ‘In He Comes’ lilting vintage folk, an alternative version of single ‘Little Red’ and her final poignant song dedicated to a local who showed her around Dingle the last time she was here but has since passed away.

The biggest surprise for many in attendance on night two is Ellie Goulding. Dispensing with the synthesizer-heavy style of her debut album Lights, Ellie has stripped it down to guitar, keyboard and a string quartet. The change in tone showcases Ellie’s voice wonderfully on songs like ‘Guns And Horses’, ‘Under The Sheets’, ‘Your Song’ and ‘Starry Eyed’. Detractors of her debut album were won over by the voice and isn’t that what this program is all about?