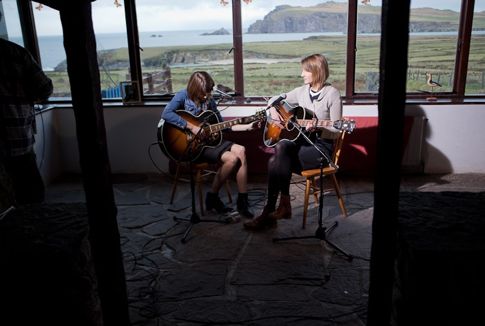 Monday night, Day 3 of Other Voices and Dingle has lost a lot of weekend out of town visitors to weekday commitments. Those people have left before halftime as there’s still lots of music to be devoured.

With artists travelling from all over the world to the far western tip of the country, it’s Irishman James Vincent McMorrow who has made the most arduous journey from Paris and has arrived within an hour of the recording of his performance. McMorrow, clearly relieved, leads his band of into a beautiful high-pitched harmony-heavy version of ‘Early In the Morning’. McMorrow’s falsetto has been impressing many of late. He’s been inducing strong feelings in audiences all year and the six-strong band do the songs from debut album, also called Early In The Morning considerable justice and then some. St. James Church is a perfect place for his music. Renditions of two new songs ‘Red Dust’ and ‘We Are Ghosts’ leave us with a general feeling that McMorrow is on the cusp of something great.

Earplugs were handed out at the entrance to the church. Why? And So I Watch You From Afar were in town and having played almost ever other venue in Ireland by this stage, they came to rock the church, and test the seated audience with their raucous and aggressive instrumentals. Apart from one girl in the church, who still had her fingers over her ears while she wore earplugs, the band were really well received. They certainly blew the cobwebs away in every corner of that church. The only thing missing was the stained glassed windows smashing with the force of the songs. No matter how many times you see ASIWYFA, their live set is always a thrill. Guitarists Tony and Rory’s guitar riffs force them to throw their limbs around the altar, bassist Johnny holds down the centre spot while eternally shirtless drummer Chris smashes drums with a strong yet controlled energy. ‘Straight Through The Sun’, ‘Start A Band’, ‘Set Guitars To Kill’ are all LOUD yet there’s no denying the terrific musicality of these Derry boys. They finish with the delicate and emotional melodies of ‘The Voiceless’, a song which means much to the band personally, so the church is an apt setting.

You couldn’t get much more contrast from ASIWYFA than with Smoke Fairies (pictured above recording a session in an idyllic setting), an English folk duo Katherine Blamaire and Jessica Davies, two prim ladies whose music is steeped in the genre. Their music is pastoral and harks back to the past. However, their time spent in America has also informed their sound with a blues tinge. Tonight is the first time that the intimate gig taking place actually feels a bit like a TV recording studio. A few of the bands avail of second opportunities to perform; one of Smoke Fairies forgets the words at the same point in the song twice. It’s all part of the deal here though and generally, the songs which are performed twice are pleasant to experience once over and it’s a rare thing. 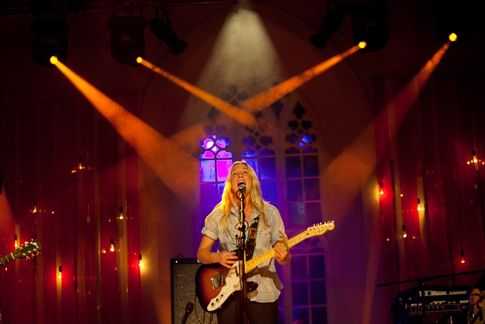 Up next was Lissie who brought a distinctly Californian outlook to the setting. Lissie is marked out live by an infectious and boundless energy, it’s clear from the zeal she’s put in, she loves her songs and loves performing. A singer like that is always a joy to watch, especially when she exudes such laid-back Californian hippy chick appeal. The songs performed from debut album Catching A Tiger are clearly informed by great rock music of the last 40 years. Occasionally, the songs remind you of specific melodies from classic songs but Lissie’s country timbre makes it her own. Special kudos must go to her drummer who plays the bass and sings backing vocals at the same time. Impressive.

Everything Everything are last to take to the stage just after midnight. Their music may just be the most difficult of this series to translate to a wider audience. They draw influences from many sources and so are hard to define. Prog disco? Experimental indie? Artful electro? Theirs is a sound that is willfully different and deliberately obtuse. Singer Jonathan Higgs’ vocal style of cramming as many words and notes into a lyric as possible might not to be to everyone’s taste. Luckily, they have pop hooks to ground their lofty aspirations and songs like ‘My Kz Yr Bf’ and the whistle-centric ‘Schoolin’ are clear standouts in the set.