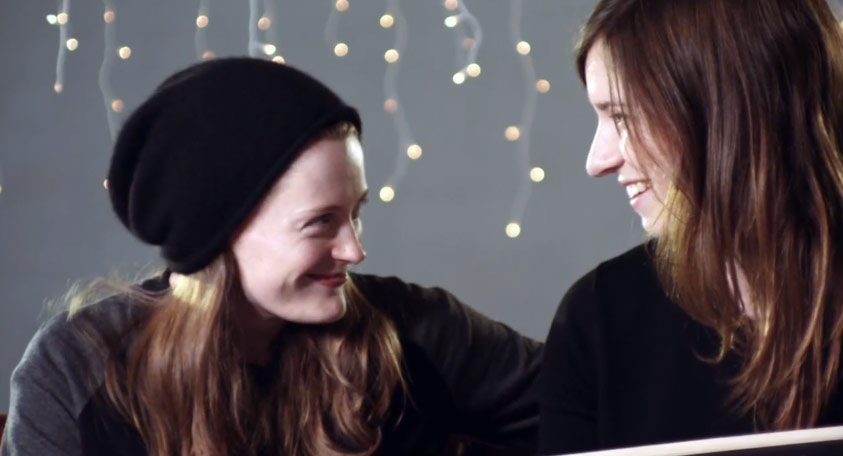 
Elaine Mai’s ‘EDC’ is a sweet aural dedication to a partner so it makes sense then for the video, made by Bob Gallagher to focus on that human bond. It’s not necessarily about romantic lovers, as the people featured in the video range from those who are that level of relationship, to family, to close friends, old friends and man’s best friend.

All proceeds from the download of ‘EDC’ to be donated to Marriage Equality.

Elaine and Bob told Elaine Buckley some of the background of the video too:

Q: What inspired the concept for the video? They lyrics obviously lend themselves very well to it – but, was their something from ‘the wider world’ that triggered the idea?

Bob: Elaine had initially approached me looking to do the EDC video and the brief was to do something simple, and she had come up with the idea of having couples write thoughts on a board for the camera. After talking about it a bit we broadened it out to be about relationships where the people involved weren’t necessarily couples, but people who were important to each other, and who would have a degree of intimacy in their interactions. The boards then became more of a reveal for what each relationship was, and the idea would be that the interactions would keep you guessing. To me the song is a very sincere and honest declaration of love, and having someone important in your life, and I think people find that love or that comfort in all different types of relationships.

Elaine M: The song itself is about relationships, the value of them, the people in our lives and what they mean to us, so I wanted to make a video that echoed this and I think Bob really hit the nail on the head. In terms of the wider world, I think nowadays we can be so busy and caught up that it’s easy to forget how amazing it is to have someone important to us in our lives, to meet up with or come home to. I think the video manages to capture intimate moments between people who clearly mean a lot to each other. It’s feel good and I think we can always do with a bit of that.

Q: Personally, I love the simplicity of the video – a battered old couch, a backdrop of fairy lights, handwritten messages on blackboards. In an age of constant connectivity it’s refreshing to see a ‘back to basics’ example of people interacting & sharing stories face-to-face – less is definitely more. Is this something that you think is important?


Bob: I think physical interaction is very important in all relationships. Since a lot of our day to day communication now can be quite removed and disconnected, seeing that physical interaction in motion makes you consider the importance of it that little bit more. The decision to shoot at 100 frames a second was to try and capture as much as possible of the fleeting, complex communication going on underneath every conversation. With people who have an intimate relationship there’s an awful lot of communication that’s done through body language, looks and gestures, the kinds of things you need to watch closely to really appreciate the significance of. When you’re the ones in the relationship of course you’ve established your own codes and you know how to read each others signals very instinctively, but as an observer you need to pay more attention to really read the situation. The video has a back to basics approach in the sense that there’s a simplicity to having two people talking face to face, but I also think that even in the digital age, the empathy you see in real life interaction is still the most sophisticated form of communication we have.